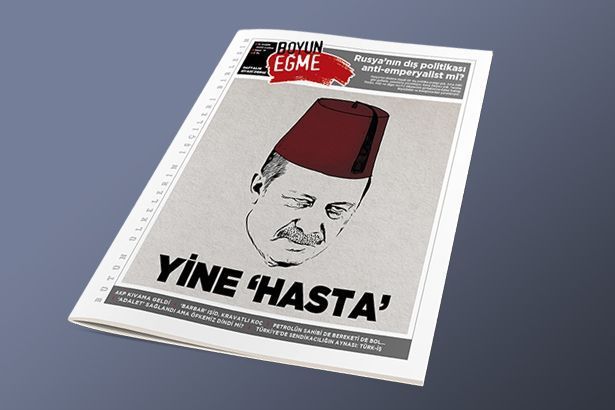 According to the bill of indictment prepared by the İstanbul Anadolu Chief Public Prosecutor's Office and accepted by the court, punishment is sought for Mehmet Kuzulugil, the editor-in-chief of the Boyun Eğme due to the accusation.

In the bill of indictment in which the President Erdoğan is named as ‘injured party’, it is propounded that libellous expressions are found in the article titled ‘Solcu Liseliler set off’ of the 47th issue of the Boyun Eğme.

The expressions in question are as the following:

‘Solcu Liseliler: We do not want to see your face!’

[Solcu Liselier] started a war against the two identical blocs, Tayyip and Fethullah [Gülen], against all religious sects which compete in reactionism. You linked arms and grinned for several years. You preached subservience, submission, being grateful. You tried to steal our lives by cyphers [ the allusion to a test examination scandal in recent years], thefts. You set on us the raper Ensar members [ the allusion to the child molestation by the members of the Ensar Foundation The more you stole, the more you fattened. You, who shouted as ’I gave the order’, the murderers of Berkin and accomplices…. Get out of our country and our schools taking along your murderers, burglars and rapers… [allusion to the wounding, and consequently death of the 15-year-old child Berkin Elvan after several months, by the police during the Gezi Park protests of June 2013 ]”