Is a new period opening in Turkey's foreign policy?

On Turkey's AKP government's foreign policy manoeuvres in the coming period, Kemal Okuyan said: "They are now swimming in risky waters due to ongoing negotiations and blackmails and perforce they will have to move in a sober fashion" 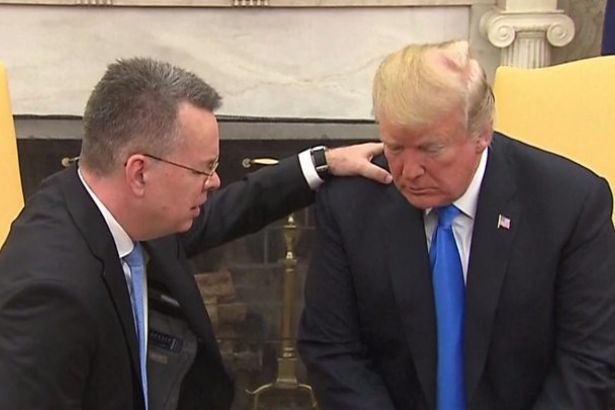 Turkey detained him for alleged connections to the Kurdish PKK militants, and CIA-related Islamic preacher Fethullah Gülen's network,  which attempted to topple down Turkish President Recep Tayyip Erdoğan by a military coup but it failed.

On Turkey's AKP government's foreign policy manoeuvres in the coming period, Okuyan said: “ They are now swimming in risky waters due to ongoing negotiations and blackmails and perforce they will have to move in a sober fashion”.

The recent developments about Bronson have something to do with a wide range of dimensions, from foreign policy to the functions of the judicial system. How should one approach the Bronson incident?

"Pastor Brunson has left the country. I don’t know know if anyone believes that he is simply an “innocent religious man”. I particularly  emphasize this since I know the word “innocence"  is such an  inappropriate word.  Evangelist Presbyterian Church, of which Brunson is a member, is  clearly one of the foreign policy instruments of US. Some assignments will be political irrespective of the individual's will. In a country like Turkey,  we can not think of such an event, especially organizing a church in İzmir, as simply an act of “pure faith”. Think of the opposite, look at the organizations of the Department of Religious Affairs in Germany and the other countries.”

Does it mean that allegations against Brunson are true?

“I can't really tell but I want to remind our readers of an old and effective method. In intelligence wars, real proofs and finding are rarely filed, in other words, the reality is masked by the unreal. This enables possible negotiations and barters. Given the circumstances, we can only say the following: there is no such thing as “an innocent religious man”, yet some of the allegations against Brunson are also utter nonsense. That is to say, when nonsensical allegations are in one's file, this does not necessarily mean full innocence either.

"It is obvious that an instrumental focal group in the headquarters of U.S. ties with July, 15. Let us rule out the ridiculous idea that Erdoğan plotted a fake coup against himself. The possibility that he had heard about the coup beforehand and abused or manipulated it as an excuse, or dressed with a sauce doesn’t change anything. Additionally, the July 15 cannot be reduced to a Fethullah Gülen’s conspiracy. We are talking about a rather comprehensive attempt here.”

It is a question asked often, why would the US plot a coup against Erdoğan, someone with whom they have collaborated for years?

“While replying to this question, we have to keep in mind the imperialist balance of forces.  We’re going through a period in which the leading imperialist countries aren’t able to set the game, are having difficulty in forming strategies, or rather having to constantly renew their strategic tendencies. Naturally, all the internal conflicts in separate countries are becoming more important. There is no country one can find where internal conflicts don’t have an impact on its foreign policy.  We observe this in  Turkey - U.S. relationship. Even if we ignore this observation, we should note that being a supporter of U.S. doesn’t mean being directly under the command of White House or being attached to the U.S. with a deep infatuation.

We have to call anyone a supporter of U.S if they have a common interest with U.S imperialism. In Turkey,  most of the politicians or bureaucrats who served the interests of U.S hated the U.S. They are aware of the crimes that the U.S. has committed in Turkey. I guess İlber Ortaylı [Turkish historian and professor] mentioned that even Süleyman Demirel [ex-president)  who was known as the most fervent U.S. supporter, had in some form exhibited behaviors of "autonomy" facing the U.S. He would not have been able to survive in Turkey otherwise. Sometimes, the autonomy transforms into a discord, a foreign government, if they have the capacity, attempts to change those in power. Demirel, despite being a supporter of the U.S, was overthrown by the U.S originated coupstwice. After the September 12 coup, both U.S. and the bosses in Turkey needed more than Demirel. One should interpret Erdoğan’s case similarly.”

After the Brunson incident, among the AKP supporters, the idea that "anything in politics is legitimate for the interests of the country" is gaining popularity, nationalist reflexes are being manipulated well and finding public support. Gradually, Erdoğan is becoming someone that cannot be objected or criticized…

“As we say all the time, there is no real opposition against Erdoğan. We turned from an opposition focusing on “why do you keep the pastor ?” to criticizing AKP because “The U.S told us and we freed him". Erdoğan will have no difficulty against such an opposition. Against Erdoğan, we have an opposition  and a hidden coalition pleading for support from the western imperialist countries.

When it suits him, Erdoğan describes this opposition as part of the international conspiracies and at other times he calls them incapable masses ignored by Western countries. He can manage even a serious economic crisis using this oscillation. We need to get the masses to see the  inseparable relationship  between the idea of imperialism in Turkey and  the current system. With an opposition telling us “Erdoğan is a slave of the U.S” someday, and  “our relationship with the U.S. is getting worse” the other day, even Erdoğan will naturally look like a worthy figure in the public eye."

Cevdet Yılmaz, AKP vice chairman of foreign affairs, said that after the current events, they would have changed of tactics in foreign policy and would try to fix Turkey’s deteriorated image. In this sense, they will have a close connection to some of the political parties and foreign investors. Considering  Brunson’s case, can we say that it is a new period in foreign policy?

“We noted that AKP has been negotiating with the U.S. and Germany and taking some initiatives to reduce the burden on the shoulders of Erdoğan. The U.S. and Germany are well-aware of this and another party is Russia. There is a limit to how far Turkey can veer away from NATO. They are now swimming in risky waters due to ongoing negotiations and blackmails and perforce they will have to move in a sober fashion. Not all existing problems can be resolved and AKP won't drop all the cards in their hands. We don’t live in a world like this.  Moreover, AKP is not cornered in Syria as it is claimed. Compared to 2015, they have a stronger hand, at least they have more than one option. They are letting the U.S. know about this as well. But this shouldn't mean Erdoğan is getting stronger. The system does not come up with any viable solutions, and internationally, those who want to drive Erdoğan into a corner have their own problems and they are not very strong either. We can say Erdoğan is setting the game taking all these weaknesses into consideration.”