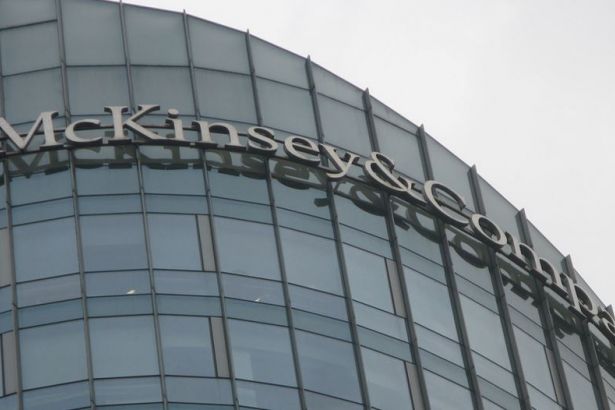 Erdoğan said on Saturday he had ordered his ministers to stop receiving consulting services from U.S. firm McKinsey, after the government deal with it came under fire from the Turkish people.

According to Okuyan, Erdoğan presents an image in dispute with capitalists, bureaucrats and even with the governmental bodies in order to clear his name and this scolding attempt of Erdoğan shall be interpreted in this manner

McKinsey issue has been broadly discussed. It is a known fact that Turkey has been receiving consultancy and other services from this company and similar ones in various subjects. Some of the opposition parties have focused their criticism on the New Economic Program. Do you think these criticisms are meaningful?

McKinsey and similar firms can be evaluated from two perspectives. First of all, these are private companies. They claim that they are selling information, experience, knowledge and systems; they are also engaged in lobbying activities and they make great amounts of money. Their services include handing out bribes directly or indirectly to bureaucrats in critical positions in order to ensure deals such as this one. They create an economy around themselves. It means that some people lack knowledge, information, and experience so they purchase them from these companies. However, the state itself should be creating and developing such knowledge, experience and information.

On the other hand, these companies shape and develop policies and produce decisions. These companies are making money and leading their clients according to the needs of strong international centres at the same time. We are talking about a company that goes back to 1926. In the final analysis, these kinds of consultancy institutions provide matchmaking services to various companies. New fields of investment, clients, partners, loan opportunities…

A serious government would not deal with such a company. Opposition parties’ position is correct until this point. However, they are forgetting a crucial point. The Turkish economy is built on this structure. This is the main driving force under the exploitation economy, which they glorify as market economy! Capitalists are in need of new markets or new areas to exploit in order to maximize their profits; they hire those who will facilitate their businesses, and they keep certain bureaucrats on their payroll. Of course, they may need certain intermediary companies in this process. The name speaks for itself: free market economy! They do not oppose this reality, they glorify this structure and then they criticize McKinsey. Thousands of elements similar to McKinsey are already in control of the Turkish economy.

But, what was not approved mostly was the fact that it is a foreign company with a bad track record.

Why would we question the opposition against McKinsey? It is an infamous crime for a US company to counsel the government of the Republic of Turkey regarding the way to resolve a crisis or for the government to receive counsel from such an institution. However, the Turkish economy has already been surrendered to international monopolies. The opposition has stated, “the cosmic room of our economy will be invaded”. This must be a joke! The steering wheel of the Turkish economy is at hands of the institutions that do not care about anything but their profits. So talking about the cosmic room or national secrets must be a joke.

Erdoğan already stated that he told all of the ministers not to receive consultancy services from McKinsey, in his party’s meeting. With this statement, the stance of the bourgeois opposition has come to nothing. Now, will the government make more “local” and “national” moves?

An opposition like this deserves such government. There is a great harmony between the government and the opposition. Erdoğan’s hand is getting stronger as both sides walk around the real problems and pay more attention to matters with symbolic value.

We are talking about a government that busts a gut in order to bring international monopolies to Turkey. It is not possible to discuss the “local” or “national” aspects of this government. Only policies, which empower the workers that make most of the population in Turkey, can be classified as “national”. The government is at the service of a minority of the population and argues that their stance is “national” and “local”! What they understand from the nation is 10-15 rich capitalists; that is what they call “local” and the common people are strangers for them.

How shall we interpret Erdoğan’s positive affirmation of economy and industrialization policies in the first years of the Turkish Republic, in his latest statement, and his expression “we are enough for ourselves”?

This question requires a slight adjustment. Erdoğan mentioned the first years of the Republic and the last years of the Ottoman Empire. There is nothing to say for his claim about the Ottoman Empire adopting an “independent” stance in the economy, defence and foreign policy in its last years. Did he say this in order to take a pro-Abdulhamit stance, did he discover the policies of the Committee of Union and Progress (İttihat ve Terakki) or did he mean Vahdeddin? I really do not know. However, the truth stays the same, “the Ottoman Empire ceased to exist by drifting between the conflict of interests between Britain, Germany and France and finally by entering into the service of German General Staff.” The last years of the Ottoman Empire are similar to these days in this manner. Turkey is drifting within the conflict of interests between Russia, Germany and the US. I think this drift is called “local” and “national”!

However, we should know that, unless a political stance that questions the system without any reservations is build up, the discourse of the government will continue to sell. Nowadays, we are facing an opposition that is shouting against McKinsey and arguing that the government secrets are being compromised; the next day the same opposition argues that the government is destroying bridges between Turkey and the West. Dealing with such an opposition is a piece of cake for Erdoğan. He tried out his position with the help of his groom (Finance Minister Berat Albayrak) and then cleared himself. McKinsey scandal will do no harm to the government as long as those in the opposition side continue screaming, “Why deal with McKinsey instead of the IMF?”

Last week I have mentioned that, “Erdoğan may position himself differently while leaving the political risks of the economic crisis to capitalists and bureaucrats.” The process develops within this aforementioned direction.

Do all these debates signal the need for a different and frontal opposition against the program to be implemented by the government in order to secure the interests of the capital in the time of crisis?

Absolutely. For the people, the main topic of debate is not McKinsey. McKinsey, McHans, McKoç are already in control of the Turkish economy and looking for ways in order to create opportunities from the crisis. How do they create opportunities from the crisis? By transferring resources from the public sector, from the community or from the people to the capitalists. All the companies are waiting in line for the restructuring of their debts. People will pay the price for this. Companies are laying off their employees in order to hire new employees with lower wages. The cost of living is horribly high. The people cannot restructure their debts, cannot exploit others. The only way out for the common people is to get organized and demand their rights and unite their demands with the struggle for a world without exploitation.

Communist Party of Turkey [TKP] is telling this to the people everywhere and organizing the workers and labourers, attending various labour rights movements and taking precautions against the vigilance of the capitalists. Today we are stepping up a gear, setting up a wide network for the labourers, and saying that we are breathing down the capitalists’ neck. The details will be declared. We are struggling with the self-powered force of the people against McKinsey and all. “We are enough for ourselves” statement is true only for the working people. When the people unite, of course, our unity will be enough against the exploiters, oppressors and burglars.