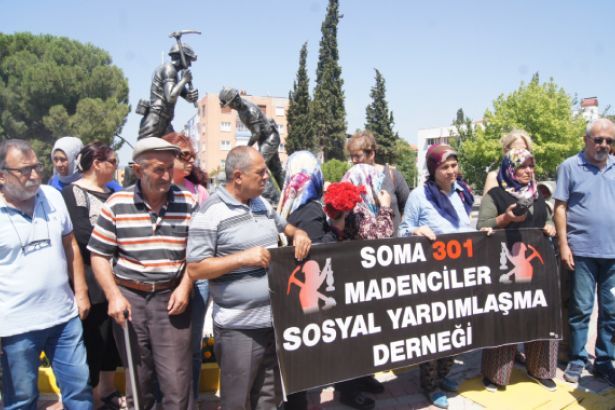 Families of the victims of Soma mine massacre launched a protest march on July 12 to protest the recent unfair court decisions regarding 301 mine workers who had been killed in May 2014 due to a coal mine explosion in the western Turkish town of Soma.

The victimized miners’ families started their protest march from a miner statue in Soma with the slogan of ‘justice’, en route to the capital city of Ankara through several provinces around the country. Their march will end up at the building of Turkish Council of Judges and Prosecutors on July 16 after a court sentenced on Wednesday some mining employees to shorter jail terms as some others could be released in a close future.

The relatives of murdered miners held a press statement in the city of Çanakkale. "I will continue to say justice for my entire life. We will re-establish the justice for our children and the oppressed," Fatma Malkoç, the mother of a killed miner, said.

Another mother of a miner, Nurcan Akdağ, told the reporters that they started to march in order to raise voice against injustices for preventing future disasters, murders and sorrows.

COURT DECISIONS ARE NO ‘PUNISHMENT’ BUT ‘AWARD’

"To tell the truth, the Soma disaster was a murder. It was neither a fate nor an occupational accident," İsmail Çolak said at the press statement, adding that they had been prepared for the court decisions on the pretext of killing with "probable intent". He accused the court of reaching unfair decisions, regarding the verdict not as "punishment" but "award".

Speaking in the name of miners’ families, Gülsüm Çolak said that they were seeking for justice for their children throughout 50 months, adding that the term 'justice' was just a vain word at Turkey’s courtrooms. "We will dig up the justice buried in the ground," she stated.

On May 13, 2014, Turkey had witnessed one of the worst occupational mass murders in its history. More than 700 miners had been trapped in one of the pits of the Soma mine, which had been a private lignite mine in country's western province of Manisa. More than 160 other people came out of the mine with injuries while 301 workers were killed brutally.

The Communist Party of Turkey (TKP) issued a statement regarding the recent court decisions, accusing then-Prime Minister Recep Tayyip Erdoğan and former energy and labour ministers of being the primary responsible for the Soma massacre.

Turkey court acquits mine boss over 2014 massacre that killed 301