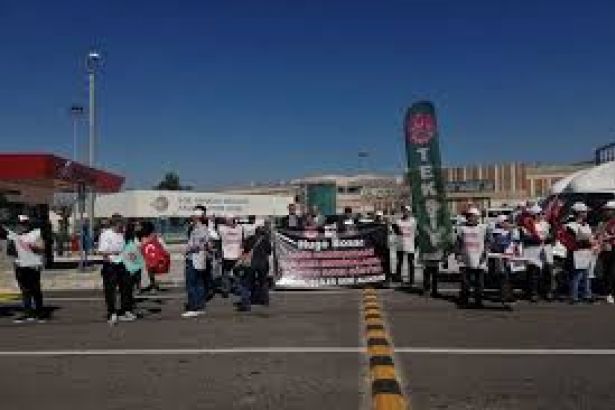 150 workers have been dismissed by the German textile brand Hugo Boss management in Turkey’s western province of Izmir in the first three months of 2019. 25 of the dismissed workers are union members.

While hundreds of workers have been dismissed since 2011 in the factory in which the Union of Textile, Knitting, Clothing, and Leather Industries Workers of Turkey (TEKSİF) affiliated to the Confederation of Turkish Trade Unions (TÜRK-İŞ) has carried out unionization activities, Hugo Boss continue its dismissals of workers.

Unlawful attitudes and anti-labor practices of Hugo Boss were previously reflected in the court decisions and reports prepared by international organizations.

According to Evrensel daily, the factory’s reasons for the dismissals are "low performance", "making other workers mentally depressed", and "causing damage to the workplace". Hugo Boss management does not even take defense statements from the dismissed workers.

Among the dismissed workers, there are also union representatives who have been working at the factory for many years.

"EMPLOYERS DID NOT CHANGE MY WORKING DEPARTMENT DESPITE MY MEDICAL REPORT"

Ergin Yıldız was a Hugo Boss worker for 14 years. Yıldız, who worked at the factory as an operator is one of the union representatives.

"Finally, they’ve dismissed me on the pretext of a decrease in my performance. They were continuously keeping us under surveillance. They were always trying to keep the workers under pressure. Hugo Boss must stop messing with the union workers because the trade union will be welcomed by all the workers at the factory sooner or later. They should respect for the labor and our rights to unionize," Yıldız said.

"EMPLOYERS DO NOT WANT THE UNION"

Özcan Keser, who worked at Hugo Boss for 9 years, also stated, "We were active in union activities. Hugo Boss employers talk about freedom to organize at the factory, but they stand against us in case of any attempts of workers to demand their rights. We need certain organizations that would be in solidarity with us when we have problems with the employers. Therefore, the union is not only for the salaries but also for protecting our jobs."

"When we did not work overtime, we were immediately excluded at the workplace, and thus, our working life was negatively affected," Keser added.

Saying that he was dismissed by the factory management on the pretext of ‘causing damage to the workplace’, Keser stated, "They can’t stand the unionization of workers. They must stop threatening workers with the dismissals. Unionization is a constitutional right."

HUGO BOSS IS INFAMOUS WITH ITS ANTI-LABOR PRACTICES

In 2011, the Hugo Boss administration had fired 250 workers for unionizing in TEKSİF. It is also known that the company virtually performs state of siege on the workers, threatening and mobbing them continuously.

In 2017, the German textile factory had fired four workers for unionizing and ‘making propaganda of the trade union’. The workers’ protest against the decision of Hugo Boss administration had been banned by the governor of İzmir on the pretext of the state of emergency rules enacted on June 12, 2017.