The protests of Hugo Boss workers, who have been dismissed for their union activities, were banned 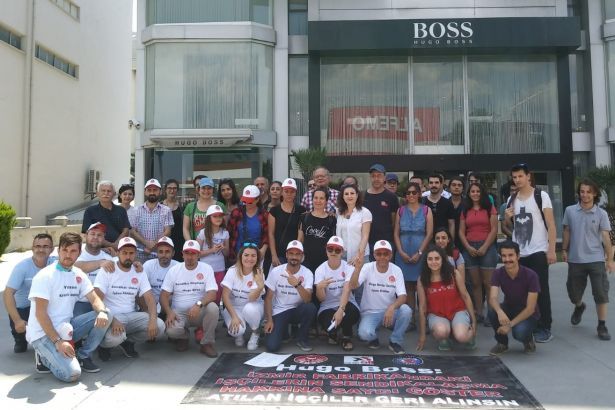 The workers of the German textile company Hugo Boss in Turkey’s western province of İzmir had been fired for their union activities. The workers’ protest against Hugo Boss administration’s decision has been banned by the governor of İzmir on the pretext of the state of emergency rules on June 12, 2017.

Having fired three union representatives in 2017 for union activities in the Union of Textile, Knitting, Clothing, and Leather Industries Workers of Turkey (TEKSİF), Hugo Boss had fired another worker, Gülden Hira, for propagandizing for the union in May 2018.

The workers have been protesting the sackings in front of a Hugo Boss store between the hours 3 pm and 5 pm every day.

Deniz Arık Binbay, the independent parliamentary candidate of This Social Order Must Change Platform, had paid a solidarity visit to the resisting workers in front of the Hugo Boss store on June 8. Stating that the workers’ motivation was strong, Binbay had said that they are always on their side in their legitimate and righteous struggle.

'When workers attempt to go on strike we suppress them,' says Turkish president