"The Justice and Development (AKP) government condemns the DPRK. But why does not it condemn 'in the strongest terms' such countries holding weapons of mass destruction that could destroy the world for tens of times?" 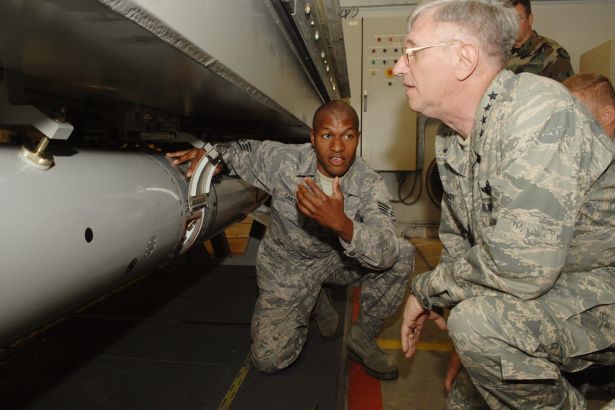 B-61 tactical nuclear bombs at İncirlik have a destructive power ten times higher than the atom bomb dropped in Hiroshima.
  

Kemal Okuyan, soL columnist and General Secretary of the Communist Party of Turkey (TKP), writes on the recent developments regarding the U.S. threats towards the Democratic People's Republic of Korea and the Turkish Foreign Ministry's condemnation of the hydrogen bomb test conducted by the DPRK.

I condemn the Foreign Ministry. In the strongest terms...

Previously, they loved to call the German Democratic Republic as "East Germany", now they like to call the Democratic People's Republic of Korea as "North Korea". It may be long and complex but still, let us not use cold war terminology.

Our [Turkish] Foreign Affairs recently protested the Democratic People’s Republic amid the two Koreas. In their own words, they condemned it in the strongest terms:

“We regard the hydrogen bomb test conducted by the Democratic People's Republic of Korea (DPRK) on 3 September 2017 in total disregard of the international law as well as regional peace and security, as an irresponsible and provocative act and condemn it in the strongest terms.”

That probably sounds like the allegation of being a “big power”, you should meddle with all the issues.

However, Turkey has not meddled with the Korean question for the first time.

As a tail of the U.S., the Democrat Party government sent a [Turkish] brigade of troops to Korea in the year of 1950, sacrificing our young sons to the imperialist aggressiveness.

The Korean War continued for three years. It started with lies. Just like the allegation of weapons of mass destruction in Iraq, just like the allegation that the Assad administration used chemical weapons in Syria... Having occupied the south of Korea which gained its independence after World War II, the U.S. put its allies on its tail and attempted to seize the whole Korea with the lie that the North [Korea] attacked the south. It did not work, and the Korean patriots supported by the Soviet Union and the People’s Republic of China put the U.S. into trouble militarily. The Turkish units, on the other hand, were victimized for enabling the American troops to withdraw easily.

Millions were killed in three years, and Korea was divided into two states. Turkey became a NATO member and rewarded with yet another disaster following the disgraceful adventure of “sending troops”.

Of these two states, the Democratic People’s Republic of Korea that has incurred the wrath of the U.S. for many years develop nuclear weapons so as to protect itself today.

Turkey entered NATO, the world’s greatest criminal organization, on the pretext of protecting itself at the time, which was its understanding of defence. There is no international organization for the Democratic People’s Republic of Korea to take shelter in.

It is obvious how the U.S. attacked and occupied the countries it “demonized”. Hence, the DPRK administration has reasonable grounds when it says, “We are under threat”. You see Iraq, you see Afghanistan, you see Granada, you see Panama...

The nuclear weapon is nefarious, so it is for everyone. Without any exception, all of them must be eliminated.

The Justice and Development (AKP) government condemns the DPRK. But why does not it condemn “in the strongest terms” such countries holding weapons of mass destruction that could destroy the world for tens of times?

These guys were no though when they deployed the German and Dutch missile batteries into our territories whilst asking “NATO, help defend us” after the gangs they had backed with arms and funds failed in Syria.

It may be fancy to object to the U.S. saying, “Hey, America”, to which they have been accustomed. They, however, should be embarrassed and say, “We also had complicity to the division of Korea, thus we had better stay silent”.

Embarrassment would be the last thing to expect from these guys.

Hey Foreign Ministry, you condemn in the strongest terms such a small country thousands of kilometres away, which is blockaded and demonized by notorious imperialists; yet we, too, condemn you and ask: is not it an irresponsible and provocative act to host 50 nuclear weapons which would lead nothing but irreparable harms to our people and the peoples in the region?

Let’s remember that the B-61 tactical nuclear bombs at İncirlik [Air Base in the southern Turkish city of Adana] have a destructive power ten times higher than the atom bomb dropped in Hiroshima.

Now tensions exist between Turkey and the U.S., somewhat real, somewhat demagogic. But why does no one worry about these nuclear weapons? If the U.S. says tomorrow, “Here is no secure,” and attempts to transfer the nuclear weapons somewhere else? What will the Foreign Affairs say? Will it say not to remove or to leave the nuclear bombs here? Will it gloss over the incident or will it declare a condemnation in the strongest terms?

To host nuclear weapons in a country which has no control over those weapons is one of the greatest disasters the people of that country would ever confront.  There are five countries in the world, which resort to such an “idiocy”; we intimately volunteered for hosting them while some countries were somehow obliged to do so.

At least, the Democratic People’s Republic of Korea has the control on its weapons. Nevertheless, we stay at the mercy of the will or words of those guys beyond the Atlantic. So as to die in millions!

So, they say they condemn in the strongest terms.