The Korean National Peace Committee and some other organizations from the Democratic People's Republic of Korea have released a statement on the recent provocations of the U.S., stating that they will fight for peace against the U.S.-led preparations for war on the peninsula 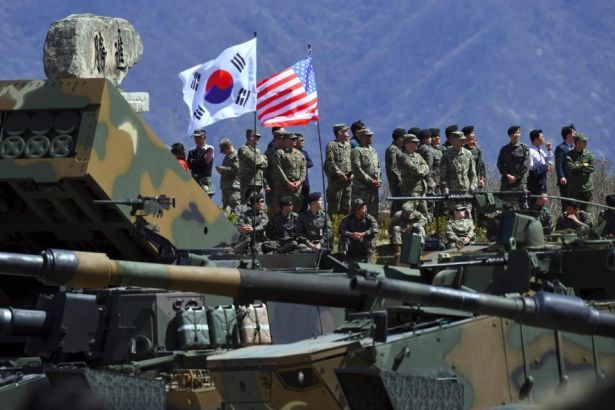 The Korean National Peace Committee and some other organizations from the Democratic People’s Republic of Korea (DPRK) released a joint statement on the recent anti-DPRK campaign led by the U.S.

The grave situation is prevailing on the Korean peninsula due to the anti-DPRK sanctions manoeuvres and war racket against DPRK of the U.S. and its following forces. In August, only within this month, the illegal and unjust sanctions and nuclear war maneuvers of the U.S. against DPRK has reached to its extreme," says the statement undersigned by the Korean Democratic Lawyers' Association, the Korean Committee for Solidarity with World Peoples and the Korean National Peace Committee.

The organizations from the DPRK state that the U.S. portrays the Far Eastern country's tests of intercontinental ballistic missiles as “a threat to international peace, and blocks the economic development and the improvement of people’s living standards."

The Northern Korean authorities set forth that after the rhetoric by the military officials from the U.S. and President Donald Trump’s threats, “the 82nd airborne division, the 25th light infantry division and the division for mountain warfare are under their large scale military drills, anticipating its involvement in the Korean front.

Navy SEAL and other special warfare units, specialized in terrorist operations, were urgently dispatched to South Korea and the plan for bringing strategic assets to South Korea was in the pipeline."

"The nuclear strategic bombers from Guam frequently fly above south Korean to openly stage actual war drills and muscle-flexing to strike the strategic bases of the DPRK," the statement says, indicating to the U.S.-led war plans in the region.

'U.S. DOES NOT LISTEN TO THE WARNINGS'

Announcing that the U.S. does not listen to the warnings, the statement briefs that the U.S. and some countries like Japan are carrying out a hostile policy against the DPRK, jeopardizing the regional peace and security.

The Korean officials state that their possession of the nuclear force is the justice and righteous measures to defend their sovereignty and rights to existence and development against the U.S. that is resorting to nuclear threats and blackmailing against the DPRK for over half a century.

Setting forth that the aggressive and predatory nature of imperialists cannot be changed, the statement concludes: “It is the only way to defend the true peace to fight against the enemies of the peace to the end while strengthening the national defence capability continuously."