Erdoğan exploits little girl in military uniform, says she is ready for 'martyrdom' 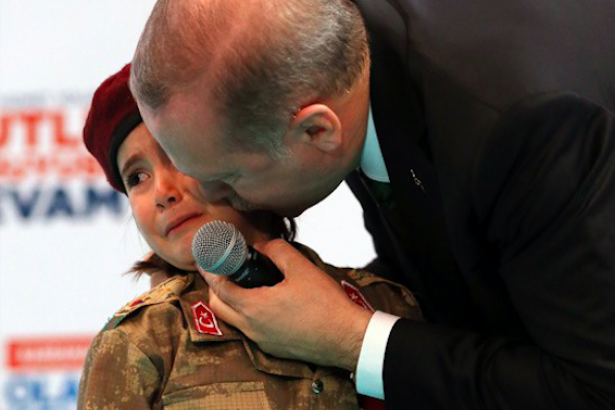 Turkey's President Recep Tayyip Erdoğan on February 24 promised to honour a young girl with the Turkish flag if she were to be martyred, during a speech in Kahramanmaraş province.

Erdoğan invited a little girl wearing special forces, nicknamed as 'maroon berets', uniform to the podium. As the little girl was crying agitatedly, the President said:

"You see we have maroon berets, too. But a maroon beret does not cry. A special command, a colonel, a maroon beret… Wonderful! Her Turkish flag is in her pocket. If she becomes a martyr, [her coffin] will be covered with a flag, God willing. She is ready for everything, is not she?"

Having been widely criticised for abusing martyrdom for his political manoeuvres at funeral ceremonies of security forces, Erdoğan’s recent showcase with a little girl has confronted a public uproar.

As his supporters chanted slogans at the congress hall, "Reis ["Chief"], take us to Afrin", Erdoğan responded during his speech, "When we decide to go, we will not leave you here. If god lets, we will go together. Those who are notified for mobilization [for any military operation], be ready."

Erdoğan repeated his words on February 25 at another provincial congress of his party in the southeastern city of Şanlıurfa. "We will declare a notification of mobilization when required. First me and then you, we can move towards Afrin," Erdoğan said.

Meanwhile, many Turkish citizens have checked the electronic-government application in order to monitor whether they are notified for military mobilization. According to Turkish law, male citizens who completed their compulsory military service can be recruited again by the Ministry of National Defense in case of any military requirements.