The collective agreement contract was signed between the Union of Petroleum, Chemical, and Rubber Workers of Turkey and the company owners in Petkim 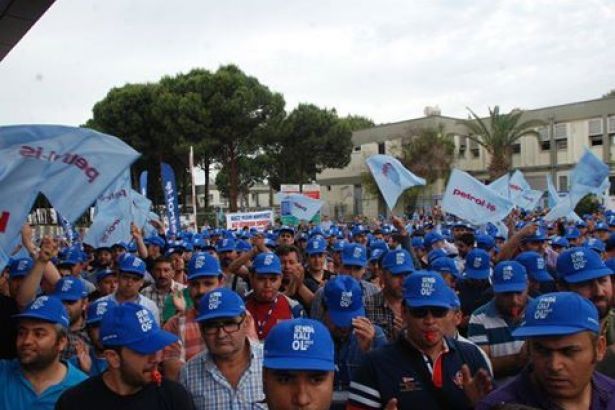 The collective agreement contract was signed between the Union of Petroleum, Chemical, and Rubber Workers of Turkey (Petrol-İş) and the company owners in Petkim, in the Aliağa district of the city of İzmir where the workers have been on strike since the beginning of this week.

The two parties got together one last time with the company owners’ demand after the declaration that the High Board of Arbitration would step in if an agreement could not be reached by 3 pm today. The information was released that the parties agreed on the general framework but are still working on some details.

Union leaders informed workers waiting in the factory entrance about the details of the agreement.

After the collective bargaining session ended up with an agreement, General Directorate of Petkim shared the conditions of the agreement with a written declaration.

According to the declaration, the 3-years contract prepared for the period from January 2017 to December 2019 has the following articles:

“Our new collective agreement contract was signed for the three years between January 2017 to December 2019. There is a wage raise of 6% in the first six months of the first year (1.27 points raise on top of 4.73% inflation) and additionally a 4 points equalisation for workers who started after 2006.

Additionally, there is a 15-16% increase in social payments and workers’ holiday bonuses are raised from 275 TL to 380 TL.”

According to the daily newspaper Evrensel, Petkim owners wanted to eliminate the article preventing temporary work. However, the agreement kept this article in line with the workers’ demand.

Some workers evaluated the agreement saying that “it is better than leaving the decision to the High Board of Arbitration.”

Another worker said, “we had the collective bargaining with the state, not with the employer.”

Petkim workers determined to go on with the strike