Petkim workers determined to go on with the strike

On the second day of the strike, the workers were attacked by the police. 12 unionists were taken into custody, but the attack was evaded with composure by the workers 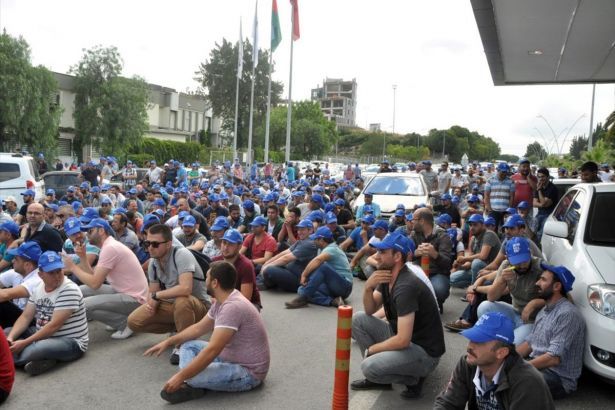 As a result of the disagreement on the collective contract between the Union of Petroleum, Chemical, and Rubber Workers of Turkey (Petrol-İş) and the company owners, workers at the petroleum company Petkim’s factory in the Aliağa district of the city of İzmir, Turkey, had gone on strike on June 19. The contract was mainly on the price gap of 16% between the new and the old employees. The union requests the elimination of the gap and an annual pay raise of 9%. The owners, on the other hand, refuse to discuss any articles on the contract unless it is accepted for the contract to last for 3 years.

On the second day of the strike, the workers were attacked by the police. 12 unionists were taken into custody, but the attack was evaded with composure by the workers.

In the meantime, the front entrance of the factory was loaded with the workers’ cars, police vehicles, Riot Control Vehicles (TOMA), and workers themselves. The police told the workers to remove their cars, and they would fine them otherwise. When the TOMA’s were started, the workers also started a sit-in protest in front of the vehicles. The workers also note that the workers gave a lesson to the employers by remaining calm and holding their peace, nullifying the provocation attempts of the employers.

The union directorship requested the removal of the barricade. Afterwards, when the police and the TOMA’s were gone, the workers entered the factory, continuing with the strike. The employers, however, refused to give the workers their meals and prevented it by threatening the catering company with terminating their agreement. Thus, the union had to order dinner from outside.

The workers who do not participate in the strike, on the other hand, have been working for more than 48 hours now.

In spite of all these attempts to end and sabotage the strike, the workers declare their determination in every chance they get. They are resolute to continue the strike until they fully obtain their earned rights and due.

The Petkim workers also receive solidarity both nationally and internationally. The United Metalworkers’ Union (Birleşik Metal-İş) made an announcement today that salutes and supports the Petkim workers’ strike, also prevising the employers to put an end to their imposing attitude on the contract.

The World Federation of Trade Unions also reported their solidarity by a notice. Emphasising that they stand by the Petkim workers as the representative of the world’s workers’ unions, the WFTU made clear that the Petkim workers’ demands were fair, and called the international working class to stand in solidarity with them.