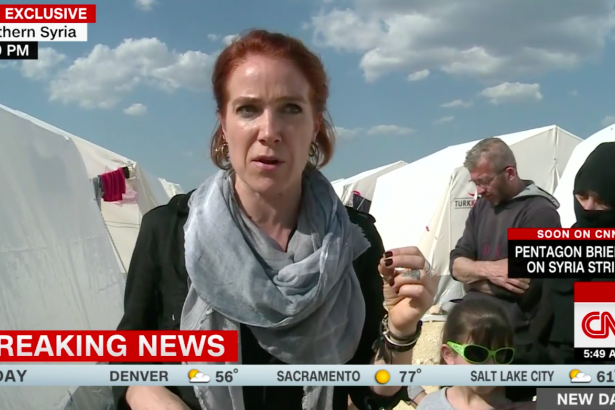 CNN and BBC journalists reported on April 16 that they talked with "witnesses" who survived the alleged chemical attack in Syria following the allied missile attack of the U.S., the UK and France.

As the allied Western forces could not show any proper evidence showing that the Syrian government had resorted to a chemical attack in Douma district of capital Damascus. A reporter from CNN claimed that she could still feel the smell of chemicals at a refugee camp.

'CHEMICAL SMELL' AT A REFUGEE CAMP

The CNN reporter went to a Turkey-controlled refugee camp in Aleppo province so as to talk with the "survivors" of the alleged chemical attack. She showed pink backpacks of some Syrian children on a live broadcast, saying that "there is definitely something... that stinks."

According to the allegations of the U.S-led Western alliance, however, the chemical attack should have been carried out with odourless gas. More absurdly, the CNN reporter could walk around the camp without fear as she "felt" the gas smell.

The reporter talked to a Syrian woman, Umm Nour, with her seven-year-old twin girls. "They were two months old when the revolution began," the woman said, referring to the anti-government protests in 2011 that had swiftly culminated in an international imperialist-backed jihadist terror.

"Someone yelled chemical," Umm Nour told the CNN reporter, "I felt my throat close, my body go limp as if I had just had everything sucked out of me." However, this narrative fits in the footage broadcasted by the White Helmets, the West-sponsored anti-Syrian government group.

CNN did not hesitate to lead propaganda for a military intervention. Umm Nour told the reporter, "What the Assad regime has done to us is a crime, he needs to be stopped," Yet another "witness," 18-year-old Malak said, "Let them hit Bashar, maybe it will save us."

BBC talked to a seven-year-old Syrian girl Masa, who calmly said that they were in a basement during a barrel shelling. The little girl went on to say that they were taken to a medical centre for intervention. However, BBC did not mind showing a little girl who still looked happy after a chemical attack, needless to say that the alleged gas attack should have been lethal.

CNN and BBC have been advocating interventionist policies in Syria from the very beginning when the legitimate Syrian government faced an international plot. As the U.S., the UK and France spearheaded the last attack on Syria following Donald Trump’s missile tweets, they have not been able to prove the alleged chemical attack, which is why they have aired such baseless footage in an attempt to convince the public opinion around the world.

The footage previously broadcasted by Russia shows that doctors said that there were no chemical indications around. Moreover, the Western alliance and their mainstream media did not wait for an examination by the Organization for the Prohibition of Chemical Weapons (OPCW). Meanwhile, nobody questions the child abuse of CNN and BBC.