Celebrating its 99th year in the struggle, the Communist Party of Turkey held a massive meeting in Ankara Nazım Hikmet Cultural Center on Sunday, September 15. As the meeting hosted hundreds of party members and friends, those who said 'We Are Ready for Socialism' became volunteers of TKP at the end of the event 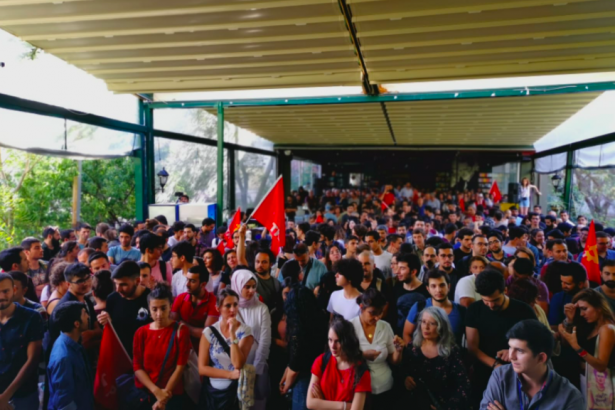 Turkey's communists met with TKP friends and members at the Nâzım Hikmet Cultural Center in Ankara on Sunday.

The meeting, which was held to celebrate the 99 years after the establishment of TKP, started with the speech of Devrim Koçak, TKP Ankara Provincial Head.

Koçak noted that TKP was set out as one of the newest members of that big family, under the conditions in which the working class, which seized the wind of the October revolution, sought and forced the revolution all over the world 99 years ago.

Taking the floor after the video, TKP Secretary-General Kemal Okuyan said "100 years ago, humanity missed the opportunity to get rid of all these troubles and the heavy tragedies that it would face later. After 100 years, we are discussing how to take advantage of the opportunity, how not to condemn humanity to darkness, and we are fighting for it."

"TKP doesn't say like others "let's breathe a little, get some peace, get some freedom". Not because they are bad things, but because it's impossible. TKP persistently says that we have missed the chance to overthrow this order of exploitation 100 years ago, now we should not do the same thing. That's why we insist," Okuyan added.

TKP calls from İzmir: "We are ready"