‘‘If we resisted against the government’s offer for low wage increase, we would have put a spanner in the works. At least we didn’t let sleeping dogs lie,’’ the President of the Confederation of Turkish Trade Unions has been caught off-camera saying to the Minister of Labor. 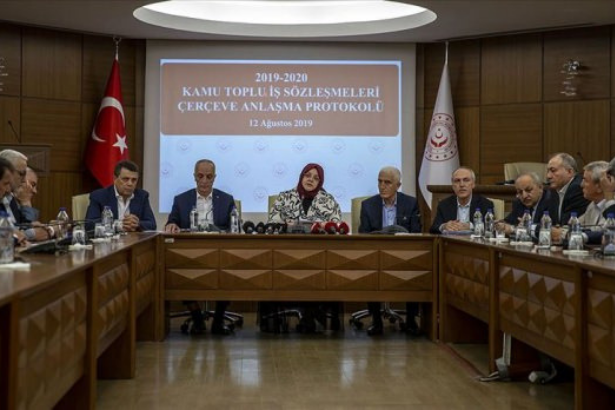 The Confederation of Turkish Trade Unions (TÜRK-İŞ), one of the yellow unions collaborating with capitalists, has come to terms with the government on collective labor agreement for workers in state enterprises on August 12, accepting the offer for low wage increase and giving up its previous demands for workers.

In the press conference held after accepting the government’s offer, Ergun Atalay, the President of TÜRK-İŞ, forgot to turn the microphone off, and he has been caught saying to Labor Minister Zehra Selçuk: ‘‘If we resisted against the government’s offer [for low wage increase], we would have put a spanner in the works. At least we didn’t let sleeping dogs lie.’’

In the negotiations between TÜRK-İŞ and the government started in early August, TÜRK-İŞ representatives had previously demanded that the lowest wage for a public worker should be increased to 3,500 Turkish liras ($625), while all public workers should have a gross wage increase of 300 Turkish liras (~$54) on an equal basis and a wage increase of 15% in the first six months as well as an additional increase of inflation (+3%) in the second, third and fourth terms.

Yet, according to the collective labor agreement between the government and TÜRK-İŞ, public workers will receive a wage increase of 8% for the first six months of this year and an increase of 4 percent for the second six months. The gross wage increase on an equal basis that workers will receive is 150 Turkish liras (~$26), the collective labor agreement also indicates.

As the statements of yellow union leader Ergun Atalay come under fire by workers, progressive trade union leaders and some politicians, workers described his words as ‘‘the document of how they sold the workers on the table’’.

In response to criticism, Atalay ironically claimed that he has always been sided with workers and he will continue to be so.

A BRIEF HISTORY OF TÜRK-İŞ

When TÜRK-İŞ was founded in 1952, almost all its members were workers in state enterprises, and trade unions had no right to strike during that period.

TÜRK-İŞ did not have any demand for the right to strike and did not take an ideological stance for the struggle for the working class since it argued that the trade union had a non-ideological and supra-political position.

However, TÜRK-İŞ did not hesitate to undertake a mission to act as a propaganda tool of anti-communism and to keep workers away from communism by establishing close relations with the United States in the heated atmosphere of the Cold War.

With the acquisition of right to collective labor agreement along with the right to strike following the 1961 Constitution and legislations introduced in 1963, TÜRK-İŞ continued to advocate its ‘supra-political parties’ policy during the process of escalating class struggles in the country.

During this period of rapid increase in private industrial enterprises, TÜRK-İŞ did not give up on state-based trade unionism and avoided organizing private sector workers.

The fact that TÜRK-İŞ kept away from the growing working class and its struggle against the capitalist oppression was the most important reason behind the break-up of the other trade unions organized within TÜRK-İŞ, especially in the private sector, and the establishment of the Confederation of Progressive Trade Unions of Turkey (DİSK) in 1967.

TÜRK-İŞ indirectly supported the Turkish bourgeoisie with its ‘‘supra-political’’ and ‘‘non-ideological’’ stance while the military coups in 1971 and 1980 violently suppressed the working class of Turkey and DİSK.

TÜRK-İŞ has also pursued its state-based ‘‘unionism’’ under the ruling Justice and Development Party (AKP). It stayed silent about numerous privatization attacks of the AKP government throughout its 17 years in political power, while it did not struggle against the anti-labor policies of the Turkish government, particularly during the times of financial crises and the aftermath of the failed coup in 2016 and the state of emergency period, forbidding any kind of workers’ demonstrations or strikes.

soL columnist and TKP CC Member Alpaslan Savaş, who wrote about the act of the union-leader said that "The yellow unions take part in the collective agreement in line with the needs of the bosses and not with the demands of workers. In Turkey, the unions that do now show this kind of behaviour remain only a few. That the acts of unions are determined by capitalist class-government is not something new for Turkey.

This is why, there is no surprise in Ergün Atalay's (Türk-İş leader) signing the framework agreement of civil servants, whispering "let's not make trouble" to the ears of the minister... What were we to expect? Was a trade-union committee that owe their seats to the government and bosses and not to the workers going to break the talks? It would go against the grain."