The World Federation of Trade Unions demands that the 2021 Nobel Peace Prize be awarded to the International Health Contingent “Henry Reeve” of Cuba. 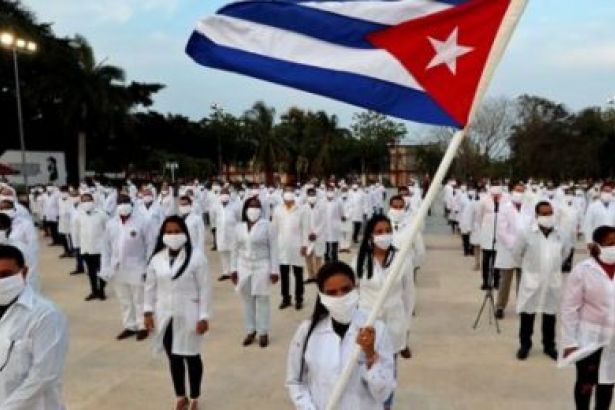 The World Federation of Trade Unions has sent an open letter to its affiliates, friends, and workers of the whole world, demanding that the 2021 Nobel Peace Prize be awarded to the International Health Contingent “Henry Reeve” of Cuba. The full letter is as follows:

Dear colleagues, brothers and sisters of the world working class,

The World Federation of Trade Unions salutes its members, friends and simple workers around the world who have been struggling day by day for their survival, for the defense of their labor rights, for having a human life in the midst of unprecedented pandemic conditions.

The workers of the capitalist countries, since the outbreak of the pandemic, not only have been counting their dead, but also have seen in the most blatant way the inhumanity of the bourgeois governments, which without any hesitations did not take effective measures for the protection of the people, so that the big capital, the bosses, would gain even more. The countless dead in the USA, Brazil, Italy and Colombia, as well as in other countries, are witnesses to the crimes of their governments against their own peoples.

However, despite the pain and grief, we workers have proudly seen the solidarity and selfless spirit of the heroes of the working class, of the medical personnel who are waging the battle against the pandemic on a daily basis across the planet.

With that in mind, we consider as the highest expression of humanity and internationalist solidarity the contribution made with selflessness by the Cuban medical brigades that for 60 years have been providing services in almost the whole world with an altruistic, solidary and humanitarian work; in particular the Henry Reeve Contingent, founded by Fidel, with the purpose of saving lives in times of disasters, epidemics, pandemics and other events that require Cuban medical and paramedical assistance.

For this reason, we consider it very important that the affiliated organizations of the WFTU, each militant union, demand that the 2021 Nobel Peace Prize be awarded to the International Health Contingent “Henry Reeve” of Cuba! In this way, the prize will be awarded to a group that truly contributes and works for the good of humanity and not for the objectives of the imperialists. At the same time, a global response will be given to those who cannot accept that a small and blocked country in the target of international imperialism can offer such a great service to humanity.

Therefore, we call upon every union to send solidarity resolutions, statements and declarations, in which it will demand that the 2021 Nobel Peace Prize be awarded to the Cuban Medical Brigades, via the following e-mail: [email protected] All documents will be published on the WFTU website.