Workers affiliated with DİSK and TÜRK-İŞ protested the transferring of severance pay to a fund across Turkey. 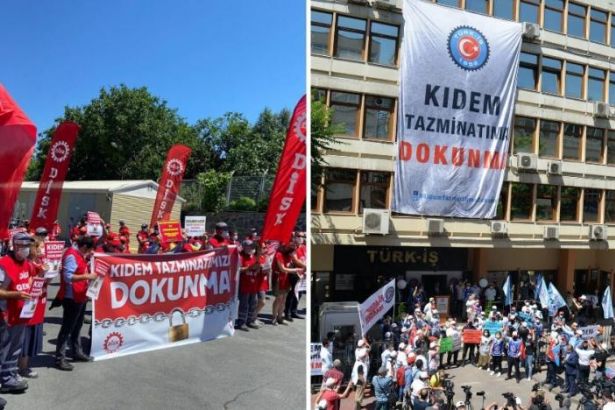 Guaranteed by the law since 1936, severance pay is one of the longest-established rights of the working class in Turkey. Turkey’s ruling AKP has recently attempted to abolish this right by transferring it to a fund under the name of the “supplementary pension system.”

Noting that the severance pay is the responsibility of bosses to workers, DİSK chair Arzu Çerkezoğlu said that transferring of the severance pay to a fund would mean usurping workers’ right, and Turkey’s working class will not allow their right to be usurped as they did not in the past.

TÜRK-İŞ Ankara representative Nihat Zengin and TÜRK-İŞ members rallied in front of TÜRK-İŞ central office in Turkey’s Ankara to protest the intended changes in severance pay. “Severance pay is the red line for Turkey’s working-class and TÜRK-İŞ. We demand severance pay be protected as it is for the present and future working class of Turkey,” he said.

Stating that there is not an agreement between social partners on the planned changes in severance pay, Zengin added that “The bosses are seeking for the solution to the present problem in workers, putting the weight on their shoulders. They are trying to impose a more flexible working arrangement on workers. We do not accept any of them.”