Why do textile workers die?

soL columnist and TKP CC member, Alpaslan Savaş, writes on the workers' struggle in the textile sector, where the work accident risk is the lowest but workers die in mass, and the recent move of Turkey's textile workers to fight together against the working conditions. 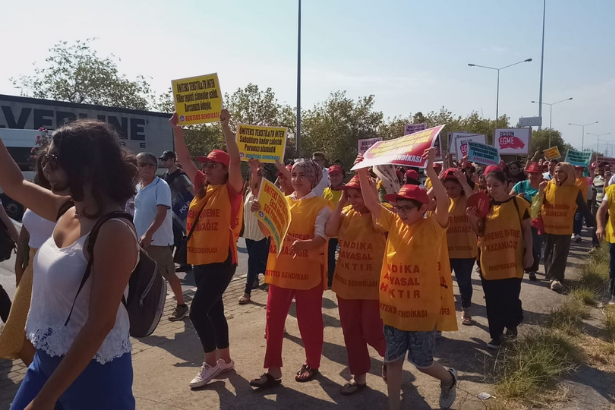 They gathered before the shift in the morning. A group among them had a quarrel with the factory manager in front of the building with fractures deepening every day. The building was not safe and the workers did not want to get in since they were worried about their lives.

The managers told the workers they would cut off not a daily wage but the whole month if they would not start the shift. Their wages were very low and monthly wage cut-off meant starvation for them. They couldn't take the risk and started working by getting inside the factory. The building started shaking just within an hour. The illegal floor, where tons of heavy generators are found to secure production in case of a power cut, collapsed. Then the other floors followed it. The workers were buried under the debris together with the machines.

On 24 April 2013, 1133 textile workers, most of whom were women, died in Rana Plaza in Bangladesh, Dhaka according to official data.

Memories of the fire that took place just a year ago in Ali Enterprises were still fresh by that time. This factory complex found in Karachi, Pakistan was a solid building but lacked emergency stairs. The windows were barred and the doors were locked. All measures against robbery were taken in the factory, except for fire. When the fire broke out, they were neither able to escape, nor extinguish it. Those able to escape the fire suffocated from the smoke. A total of 289 textile workers died inside.

The fire in Ali Enterprises reminded everyone of the Triangle Shirtwaist fire that happened a hundred years ago, in 1911. In the fire that broke out in this famous New York factory, 146 women workers died because of the same reasons in Ali Enterprises. Locked doors, barred windows...

Triangle, Ali Enterprises, Rana Plaza and tens of other factories... Workers died in mass in a sector with the lowest work accident risk.

Pameks Textile workers in Halkalı, İstanbul experienced a similar accident in 2007. 7 female workers could not even notice the approaching danger while going to work in the minibus without a window, designed for cargo transport. They were drowned in that minibus, swept away by the flood.

Textile workshops in Rana Plaza worked for famous brands like Benetton, Bon Marche, Mango, Matalan, Primark, and Walmart. Short a while before the fire, a US-based supervision company gave a prestigious conformity certificate to Ali Enterprises following a four days inspection. This company named Social Accountability International was funded by companies like Gap, Gucci, and Carrefour.

Max Blanca and Isaac Harris, the bosses of Triangle garment factory, were acquitted of their crimes following a trial by judges they bribed. Cevdet Karahasanoğlu, the owner of Pameks Textile, was released in his first trial. He is now the vice president of the Turkish Clothing Manufacturers' Association.

A hundred years ago, a hundred years later... From Karachi to Dakha, New York to Halkalı... We witnessed the mass death of textile workers. The risk in the textile sector does not originate from the work itself but the factory owner. As we say 'not an accident, occupational murder', this is the case in the textile sector more profoundly. One of the reasons for this occupational murder is the impudence of the bosses.

The other reason is that the workers are not organized. That's why they could not decisively reject to get inside a severely damaged building or did not say even a word about being locked inside the workshop. Accepting to go to work by a cargo transport bus or not confronting the employers when the wages were not paid result from this as well.

A new experience has recently become a hope against the unorganized condition of the workers. The solidarity network 'We Breathe Down the Bosses' Neck' gathered important models of workers' organization in the textile sector. These examples not only enabled economic gains for the workers in solitary workplaces but also gathered workers from different workplaces to create regional networks.