Who is behind Turkey's failed coup attempt? 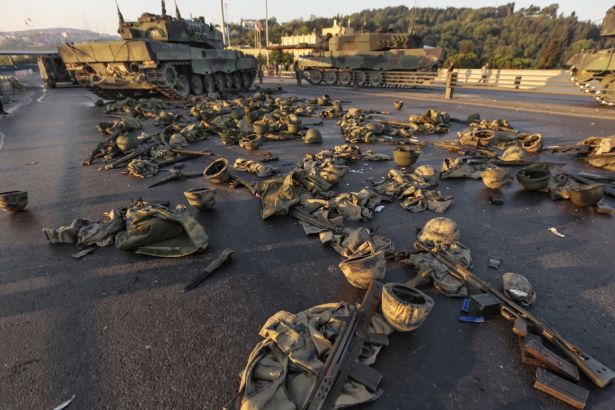 The Central Committee of Communist Party, Turkey  released a declaration for the peoples of the world in the aftermath of the July 15 coup attempt in Turkey:

Letter from Turkey to the peoples

"We witnessed an attempted coup in Turkey on the night of July 15. Despite its oddnesses, obscurities and uncertainties about the actors behind it, this was a genuine coup attempt.

The failure of this attempted coup is to the benefit of our people. If the coup had succeeded, the working people already burdened with all the imaginable problems laid on them by the capitalist system would have had to face heavier and more destructive conditions. One needs to keep in mind that the coup plotters have a pro-NATO and Islamist orientation and they have been serving the international monopolies for decades.

Another fact that one should keep in mind is that Fethullah Gülen emerged in the arena of politics within the ranks of the “Organization of the Struggle against Communism”. This organisation was founded in 1960's by the CIA.

What is interesting and ironic is the fact that Erdoğan, the primary target of the coup, and the coup plotters share the same ideological and political background. Islamism, anti-communism and full loyalty to the capitalist class are defining characteristics of Erdoğan as well and just like Fethullah Gülen, Erdoğan has also played significant roles in the Middle East scenarios spearheaded by the U.S.

There are a few reasons behind the recent tension between U.S., E.U. countries and Erdoğan. The failure in Syria, Erdoğan's continuous triggering of tensions within Turkey, his creation of a large room for manoeuvre with electoral support behind him, his 'out of control' moves are some of the first reasons that come to mind. However, this tension has gradually become a factor in the contest created by the deep economic and political conflicts ongoing between U.S. and the forces under U.S. influence against the Russian Federation.

As Erdoğan and his clique are in an existential struggle, facing domestic and international isolation, Putin administration, using 'carrot and stick' tactics, are advising Erdoğan to break ties with NATO or at least refrain from supporting NATO policies of Russia's encirclement.

The dissolution of Turkey's economic, political and military relations with especially Germany and U.S. can only be achieved by a socialist revolution. A change of axis within the current order will only increase the possibility of chaos, conflict, civil and international war.

The developments show that tough negotiations between the current government and U.S. and EU will continue. Turkish bourgeoisie is increasingly taking more initiatives while the opposition within the system is playing the mediator role for the ongoing negotiations.

On the other hand, Turkey is going through a period following the coup where all law has been suspended, all decisions and the restructuring of the state are monopolised by a small government clique. While not at a mass scale, arrests and purges that are targeting the coup plotters have now extended to progressive, revolutionary and communist sectors that have been struggling against Fethullah Gülen sect and other similar Islamist organisations.

Under these conditions, the Communist Party is making the following call to the peoples of the world, to the working class organisations, to all revolutionary and communist forces:

2. The debate in the international press about whether “the coup was real or not” is a trap, one that should be avoided. What needs to be discussed are the nuclear weapons in İncirlik base, NATO's covert operations, how and on whose behalf Fethullah Gülen founded this dark organization that serves the capitalist class in over hundred countries, the profits that tie Islamist Erdoğan and “secular” European leaders, the plunder of Turkey's public resources by the international monopolies and the immense exploitation all workers and toilers in Turkey are subject to.

3. We need to stand against all interventions and attempts at a "colour revolution," even those that are seemingly against the anti-people government of Turkey. There is no good and bad capitalist. The insincerity of the statements by NATO and E.U. expressing concern about the issues of freedom and democracy in Turkey is obvious. The social liberation in Turkey will be the product of only the working people in Turkey.

4. Similarly, it is incomprehensible that Putin's Russia is portrayed as the liberator. The position of the Russian Federation towards Turkey is totally pragmatic and is completely shaped by the interests of the Russian ruling class. Putin administration that extolled Erdoğan a year ago declared the same Erdoğan a war criminal following the downing of the Russian war plane and even handed the U.N. a file full of proofs. However a few weeks before the coup attempt, the love affair between Putin and Erdoğan was rekindled. We will not let the forces within the imperialist-capitalist world order be the ones determining the future of our country.

5. Moderate Islam is a concept fabricated by the U.S. Freedom of belief and worship is a fundamental right. However, religion needs to be pushed out of all fields of politics and law. There is no moderate version of it. Any person or movement in Turkey doing politics in the name of religion or with religious references is committing a crime. The current situation in Turkey is an opportunity for appreciating the importance of secularism and understanding its vital meaning for the oppressed. This opportunity can be put to good use only by linking such prior gains of humanity with the struggle against capitalism, not by clearing the field for racist and xenophobic ideologies in Europe.

6. The history of Turkey is the history of coups, political assassinations, religious fanaticism and militarism. However, this is not all Turkey is about. Throughout its history, there have also been good developments in Turkey. The Republic of Turkey was founded as a result of the struggle waged together with the young Soviet Russia against an imperialist occupation. Since 1923, struggles against war, tyranny, capitalist exploitation never ceased to exist, with mass actions of the working class. An international communist poet like Nâzım Hikmet is the product of this country. The legitimate popular movement that rose up against the government three years ago also points to the fact that there also exists a different front in Turkey that recently witnessed the fight between two Islamist cliques. We are calling on you to follow the front of the workers, to stand in solidarity with them and to make its voice heard. Against the capital, dictators, coup plotters of the monopolies, the working people, the revolutionary intellectuals and the communist militants have the tradition of internationalism.

Communist Party of Turkey comes back to political scene