What is the main purpose of Erdoğan’s Hagia Sophia move? 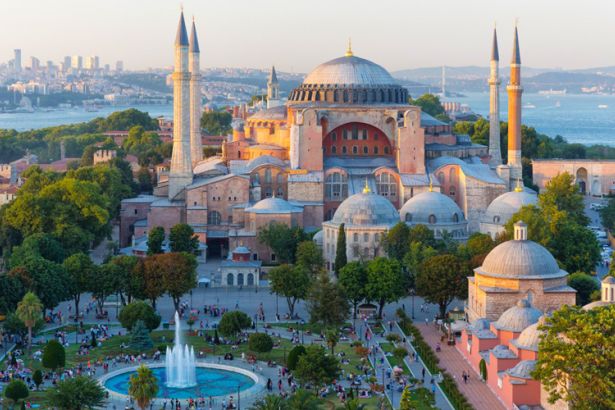 Kemal Okuyan, the General Secretary of the Communist Party of Turkey (TKP), has written an article today, discussing President Erdoğan and his government’s political motives in transforming the nearly 1500-year-old world heritage monument Hagia Sophia into a mosque.

The government turned Hagia Sophia into a mosque for prayers. Doubtlessly, there will be international reactions, yet not to a larger extent that Erdoğan could not risk. Around the world, anyway, no one can see beyond the end of their nose; everyone is preoccupied with their own problems.

What about the economic results?

Some say that tourists will not come, the stock market will collapse, the dollar will soar. However, these are already what are taking place now in Turkey. The economy is in such a situation that the government can tolerate a problem like Hagia Sophia! They can somehow muddle through the situation as they may blame the opponents of the Hagia Sophia move for being the part of jealousy, the Crusade, the Holy Alliance, lobbying…

Today, the government is making moves in order to get free from the internal pressure. The social base of the AKP-MHP block [the ruling party and its unofficial partner -Nationalist Movement Party] is continuing to melt down, and this bleeding could not be stopped no matter what they have done. However, this is not the only data in terms of the political balances. The melting down within the AKP-MHP does not reflect on the personality of Erdoğan proportionally. In other words, Erdoğan continues to be a political actor over his party. Additionally, it is a very disputable argument that the CHP [the main opposition party-Republican People’s Party] receives what AKP loses. Furthermore, there is no finding showing that the support to the parliamentary opposition parties has increased.

What has recently furbished the opposition is the two new parties originated from the AKP. Although Babacan [the chair of DEVA-Democracy and Progress Party] and Davutoğlu [the chair of Future Party] do not have any special assertion, their rate of votes corresponding to five percent in total is highly upsetting Erdoğan.

For years, we have described Erdoğan as a “man who spoils the alliances rather than establishing them”. He is good at this job. More precisely, he was good at this job. The government has failed to spoil the alliance of the CHP, İYİP [Good Party], HDP [Peoples’ Democratic Party], SP [Felicity Party] and the others no matter what it did. The government has attempted many ways to do so; it was about to achieve it during the military operations in Syria, and with its recent move to dismiss some lawmakers [from the opposition], but there is an extremely decisive block against it.

The opposition block gets damaged whenever Erdoğan presses upon the CHP and İYİP through the HDP, but things are put on the right track when some influential figures take the role in a short time. The personal share of Kemal Kılıçdaroğlu [the chair of CHP] is very big in this success. No development can prevent him from his passion for the Nation’s Alliance [the opposition alliance against Erdoğan’s ruling People’s Alliance]. He already embraced İYİP and SP, now he has embraced Babacan and Davutoğlu; therefore, as the CHP is further leaning towards the right wing, it has also reinforced the right wing of the opposition.

Yes, whatever Erdoğan did has not worked out. “They don’t become provoked but they thank you even if you spit in the face of them on the street,” a classified document of the US says for Salvador Allende, and his friends, the leader of the Popular United that was toppled down by fascist Pinochet in Chile. The same tone is relevant here in Turkey.

What about this question of Hagia Sophia?

The Hagia Sophia move should be considered as yet another, albeit from a different aspect this time, interference in the Nation’s Alliance that could not be dissolved in any case. Having failed to spoil the opposition by pressing upon the HDP, Erdoğan, this time, has decided to address the genetics of the Nation’s Alliance’s elements originated from the National Vision [a traditional Islamic current and party-SP], and the MHP. So, Hagia Sophia is a perfect choice. The SP is very happy, so is İYİP; the two AKP-rooted parties are not out of the picture.

Transforming Hagia Sophia into a mosque, Erdoğan thus asks the rest of the Nation’s Alliance except the CHP: “What are you doing there?”

However, what Erdoğan could not take into consideration is Kılıçdaroğlu’s patience. Kılıçdaroğlu’s fiercest response to the question of Hagia Sophia was like “open it but you can’t”, then he spoiled the “big game” as he said, “promise, we won’t criticize you if you open it”!

In other words, Kılıçdaroğlu says, “We are from the same neighbourhood with you…”

In this case, does Erdoğan’s move fail?

In this sense, turning Hagia Sophia into a mosque, as well as blatantly tearing up a decree undersigned by Mustafa Kemal Atatürk whilst converting the museum into a mosque, is not the same thing as appointing someone, who is very controversial from the perspective of the supporters of the CHP, to a very important position within the İstanbul Metropolitan Municipality or appreciating Babacan and Davutoğlu. Disheartening is inevitable among the CHP voters who have sticked to the Nation’s Alliance with the feeling of despair.

In other words, Erdoğan, this time, is targeting a different aspect of the opposition block, waiting for those people having secular sentiments to protest saying, “Enough!”

And it is funny that the CHP will warn again not to “fall into the trap”! What a pity for the working people who have secular sentiments in Turkey. Most likely, now they will be forced again to tolerate stomping on secularism that has been already abolished so as not to fall into the trap of Erdoğan...

Here we are not talking about the CHP. What matters is Turkey’s social sections that have secular sentiments. They are not desperate. They are not as weak as they are thought to be as long as they stay away from the real trap that has been created with the fear of falling into a trap. The trap in Turkey is to be stuck in between the government and the opposition block that are completely under the control of capital and imperialists. The trap in Turkey is an inertia and submission that will lead to the liquidation of the country’s whole progressive accumulation.

Let me put it clearly, the Nation’s Alliance, with all its annexes, has turned into an operation of collapsing the country’s resistance completely with the fantasy of “defeating Erdoğan in the elections”