"We will heighten Montaña de Luz" 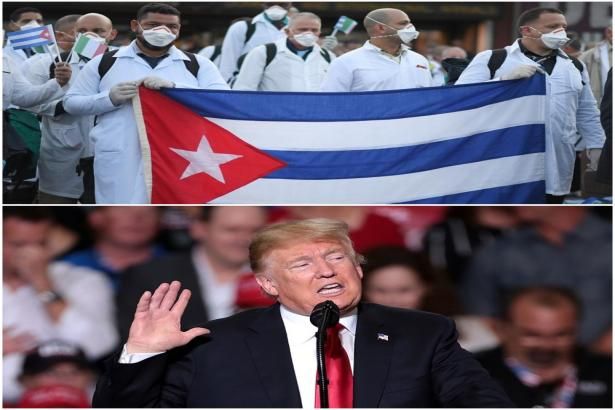 Ekin Sönmez, the CC member of the Communist Party of Turkey (TKP), commented on the politics of the Nobel Peace Prize, for which the US President Donald Trump has been nominated recently.

In September, the Nobel Prize Committee begins to decide on the nominees. This process continues until the beginning of the following year when the Prize would be given, and the nominees are evaluated by the Committee. Peoples only with certain titles, MPs, academics, and chairs could nominate names. Nobody could nominate themselves.

We should know this detail. The José Marti Cuba Friendship Association has been pioneering a campaign so that Cuba's Henry Reeve International Medical Brigade could win the Prize. The Brigade has been working against the US embargo and it has functioned in several countries against the COVID-19 pandemic. Not only the Association but many friends of Cuba have been calling for the same goal. Cuba has been working for solidarity and labor for human life in dignity.

A member of the Norwegian Parliament has nominated the US President Trump for the Prize. The questions about whom this MP followed. Even if he was known for his far-right ideas and activities, the MP was not very famous. His name was mentioned the most probably today for his Trump nomination.

While this nomination was registered as an odd day in history, the nomination itself fundamentally showed this: The capitalist world has been rotten. It has been rotten to bear the possibility that the Nobel Peace Prize could be remembered in a good way and solidarity could be maintained to recognize Cuba’s legitimate presence.

Apparently the nomination of the Cuban health workers has frightened the capitalist world. The fact that people talk about Cuba and the Cuban health workers and their successes with pride, and they commemorate Fidel’s words and internationalism has disturbed the enemies of such norms and values. The USA is one of the significant countries where one can find the echoes of this campaign. The US artists, intelligentsia, and people have declared their support for Cuba, organized concerts, and recorded their videos. These should have disturbed if not embarrassed the US ruling classes and their imperialist allies. Otherwise, the US should be relaxed about the ideological content of the Prize.

Cuba has been ambitiously working hard against the pandemic. No health worker, no pregnant woman, and no child died because of COVID-19. Almost all of us wonder should Cuba soon produces the vaccine against the COVID-19. One should remember that the scientists self-try the vaccine as a first step. They radiate light to the world. No wonder why the documentary about the Cuban voluntary health workers is called ‘Montaña de Luz’.

Let’s now imagine and discuss the material consequences if the Brigade wins the Prize. The US embargo prevents the import of food, fuel, pencil, or notebook, and the USA is waiting for Cuba to give in. Can the USA swallow and do nothing to prevent this?

Can Trump stand this? He would probably ‘eat’ the Prize himself. The Prize could only increase Trump’s wealth. But can it be in the interest of any nation? If the Cubans win the Prize, the USA could blame Cuba and communism for the virus.

Therefore, this is a matter of struggle. The struggle is not only about Cuba winning the Prize but saving humanity from rotting. The campaign is a part of this struggle.

We will develop ‘Montaña de Luz’. We will defend that the Cuban health workers would win their deservedly Prize. We will spread their word, the word of people who know nothing but the names they saved. The Prize would not damage the political position of the Brigade; it would be advantageous for certain power dynamics in favor of Cuba. However, in case Trump gets the Nobel Prize, it would badly affect everybody’s life.

It is very simple sometimes: