U.S. moves IS militants from Syria to Iraq - SANA

The U.S. occupation forces are working on transporting IS captives in Syria’s Hasaka city to Iraq aboard helicopters, according to the Syrian Arab News Agency (SANA), the official news agency of the Syrian government 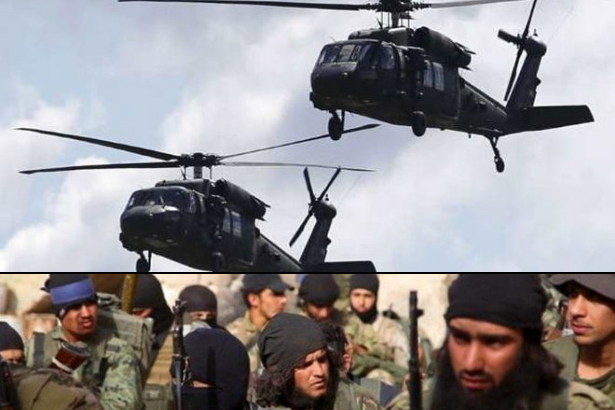 The U.S. occupation forces have moved about hundreds of Islamic State (ISIS) terrorists and their families in from Syria to Iraq aboard helicopters, the Syrian national news agency SANA reported.

The U.S. troops moved hundreds of IS militants detained in al-Jazeera region to Iraq after gathering them at the illegitimate bases of the U.S. in the Syrian territories under the pretense of "investigation for terrorism", according to the report.

American occupation forces have transported dozens of IS detainees from al-Houl Camp, located in the east of Hasaka city, in parallel with intensive overflights of the U.S. helicopters over the camp, media and local sources told.

Sources also pointed out that the U.S. move to transport IS terrorists from Syria to Iraq took place just 24 hours after transporting 230 foreign jihadists from al-Malkiya prison to al-Shadadi prison in the southern countryside of Hasaka.

IS MILITANTS ARE IN ‘SAFE TERRITORIES’ UNTIL THEIR NEW MISSIONS ASSIGNED BY THE U.S.

In its recent report on Oct 21, SANA claims that hundreds of IS militants and their families from Syrian territories have been transported to Iraq by the U.S. occupation forces since the beginning of the Turkish offensive on the northern Syrian territory on Oct 9.

Syrians also note that IS members have been equipped by the U.S. army in many similar incidents throughout the war in the region.

‘IS IS SUPPORTED BY THE U.S. AND ITS ALLIES’

As it is claimed that the U.S. government plans to reuse the IS jihadists transported from Syria to Iraqi territories to achieve its interventionist policies in the region, SANA’s report also reminds that the financial resources of the IS mostly come from the purchase of oil which has been stolen by IS from the Syrian oil fields by particular interest groups including Turkish President Recep Tayyip Erdoğan’s son Bilal Erdoğan and members of his family in order to support jihadist terror organizations fighting against Syrian Arab Army (SAA).