The broad unemployment in Turkey increased despite the Turkish Statistical Institute’s recent data, showing that unemployment decreased in February 2020 in comparison to the previous year. 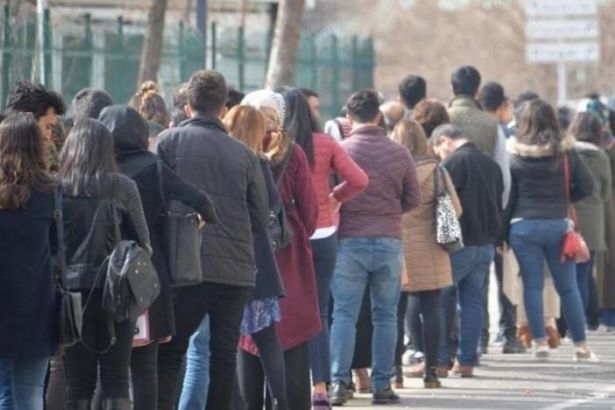 Turkish Statistical Institute recently announced the workforce data for February 2020. According to the data, the number of the unemployed decreased by 500,000 (1.1%) in comparison to last year.

Considering that Turkey started to feel the impact of the coronavirus pandemic in March, Aşkın Süzük, the Communist Party of Turkey (TKP) Party Central Council member, asks how unemployment reduced in the country according to the official statistical institute.

“An unemployed person can be easily defined out of the workforce market,” Süzük says, by means of the changed methodology of the statistical institute. Accordingly, the broad working masses are not included in the calculation of the unemployment rate.

After a change of criteria imposed by the government in 2014, the period of reference for job searching was reduced from “the recent 3 months” to “the recent 4 weeks”. As the reference period was reduced, it became difficult to identify the number of unemployed by means of a workforce survey. For instance, a person who looked for a job a month ago is not defined as unemployed.

Süzük says that the broad unemployment rate has further increased since 2014. However, the increasing rates could be “moderated” mathematically especially during the times of economic crisis.

The statistical institute announced the rate of unemployment as 13.6 percent (4.22 million) in February 2020, which shows a “reduction” in comparison to the previous year. Süzük says, however, the rate of broad unemployment rose by 2.4 percent in the same period.

As the institute claims that the number of unemployed reduced by 502 thousand, this number increased by 758 thousand considering the broad unemployment rate. This rate is 24.5 in February 2020 as the number of the unemployed rose to 8.42 million.

PEOPLE GAVE UP LOOKING FOR JOB

The broad unemployment rate among the women reached 31,4 percent in the last year. Süzük says that the number of the women workforce decreased as the number of women who did not look for a job proportionally decreased.

Süzük goes on to say that most of the women workforce do not look for a job since they do not have any hope for a job in Turkey. The shocks in such labor-intensive sectors as service and textile have impacted this situation considering that women are mostly employed in such sectors.

Süzük concludes that a new different pattern of the crisis has already emerged in the figures of the workforce although the impact of COVID-19 has not been reflected on the data yet. These figures of crisis may fuel a social explosion along with the impact of the pandemic.