Turkish Minister of Forestry: Helicopters are cheaper than fire-fighting planes

Minister of Agriculture and Forestry Bekir Pakdemirli responded to the criticisms about extinguishing aircraft not being used in forest fires in Turkey's Izmir. “I do not owe a penny to the Turkish Aeronautical Association and I also do not have to use their services," he said 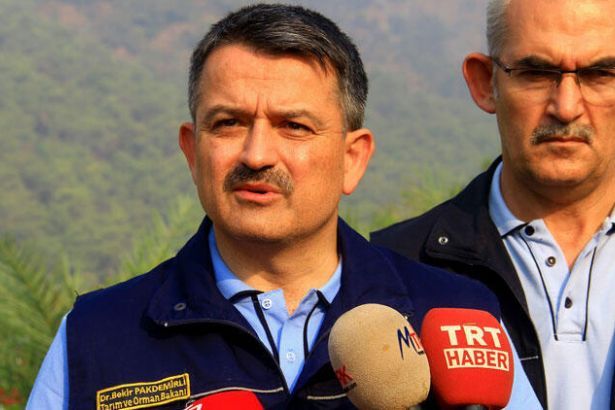 Pakdemirli argued that a ton of water poured into the flames for the helicopter was 1,300 lira, and for the plane, it was 7 thousand 944 lira. The minister also claimed that  "the fleet of airplanes may have been used if they are of a certain quality, but that the aircraft is 6 times more expensive than the helicopter”.

Pakdemirli continued by stating, “I don't owe a penny to the Turkish Aeronautical Association (THK) as a ministry. We do these things by tender processes. I do not have to take this service from the THK."

DOCUMENTS REFUTE THE MINISTER: THK WAS READY TO FIGHT

Minister Bekir Pakdemirli also stated that 3 of the aircraft that were not used in İzmir fire did not have engines and that the other three were leaking oil.

According to Tuncay Mollaveisoğlu from Cumhuriyet daily, the claims of the minister is denied by the documents issued by the General Directorate of Civil Aviation (DGCA). The DGCA issued a certificate of conformity for the five aircraft owned by the THK.

The THK, despite being excluded from the fire extinguishing process, still made preparations for the 5 aircraft, and received the certificate of airworthiness from the General Directorate of Civil Aviation. Although THK was ready, the Ministry of Forestry and Pakdemirli still did not invite THK to fight the fire.

A senior THK official stated, “Our fire fighting planes are neither broken, old, nor oil-leaking,” and continued, “We haven't had any conversations about financial concerns with anyone. Our five planes were ready, if they told us to come, we would help immediately. We don't consider the tender, nor the money. THK is not a company. We are out of politics. 4 of the aircraft are 1980 models, others are 1970s. There are no old planes in aviation, only neglected ones.”