While Hulusi Akar, the Minister of National Defence of Turkey, asked NATO and European powers to provide Ankara with military support regarding the recent conflicts in Syria’s Idlib, the U.S. National Security Advisor Robert C. O’Brien said Washington has currently no plan to conduct a direct military intervention in the region. 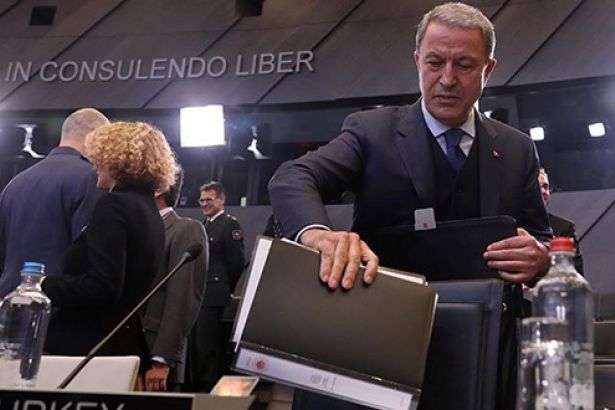 ‘‘Turkey would not withdraw from any of its 12 observation posts in Idlib. Our soldiers are ready to further retaliate against the attacks coming from the Assad forces on the military posts,’’ Turkish Defence Minister Hulusi Akar said in an interview with the Associated Press (AP) on Tuesday.

Stating that Turkish soldiers have been given order to retaliate more violently in the case of any action against them, Defence Minister Hulusi Akar noted, ‘‘We expect the [Assad] regime to not carry out any action under any circumstances.’’

Syrian Arab Army (SAA) retook the control of M5 highway for the first time in since 2012. The M5 highway connects Damascus with the northern city of Aleppo, running through the two important provinces, Hama and Homs, under control of the Syrian government.

CALL FOR ‘CONCRETE SUPPORT’ FROM NATO AND EUROPE

Asking NATO and European powers for a direct military intervention in Syria against the Syrian government, Akar continued, ‘‘NATO, Europe and international community must deal with the attacks of the Assad regime in Idlib, and provide serious, concrete support to those fighting against it.’’

‘‘People who have lost their homes and families are trying to do something in despair, which strengthens the hands of radicals. And it paves the way for radicalization by any ways’’, he claimed.
However, it is known that Turkey has given direct support and worked with radical Islamist jihadi groups ─ such as Al-Qaeda-affiliated Ahrar al-Sham, Hayat Tahrir al-Sham, and even Al-Nusra Front ─ fighting against the Assad forces since the beginning of the war in Syria. Moreover, Ankara’s one of most loyal allies in the region, the Free Syrian Arma (FSA), was still entangled with Al-Nusra Front, while its members exhibit radical Islamist ideology, according to the reports.

‘WASHINGTON HAS NO PLAN TO CONDUCT A DIRECT MILITARY INTERVENTION’

On Tuesday, U.S. President Donald Trump’s National Security Advisor Robert O’Brien evaluated the Washington’s policy on Syria and recent conflicts between Turkey and Syria in Idlib at a panel organized by an American think tank, the Atlantic Council.

‘‘We’ll continue to declaim that civilian massacres in Syria must be stopped, but I don’t think we will intervene militarily in Idlib,’’ O’Brien said.

Claiming that Russia and Iran along with Syria are attacking Turkish soldiers and other military elements collaborating with Turkey in Idlib, O’Brien asked, ‘‘Are we supposed to land there with a parachute and stop the attacks as a global police?’’

DAMASCUS: ‘ERDOĞAN IS DISCONNECTED FROM REALITY’

However, Moscow accuses Turkish government of violating the Idlib agreement signed in 2018. The Kremlin Spokesman, Dmitry Peskov, said that Ankara had assumed full responsibility to neutralize terrorist groups in Idlib, which is failed under the current circumstances.

The Idlib agreement is a consensus between Turkey and Russia to create a demilitarized zone (DMZ) in Syria’s Idlib Governorate, which was under control of Turkey-backed jihadists at that time, to be jointly patrolled by military forces from Russia and Turkey to prevent possible clashes between the Syrian government forces and militants. On September 17, 2018, the Russian President Vladimir Putin and Turkish President Recep Tayyip Erdoğan had reached an agreement to create a buffer zone in Idlib.

‘‘The head of the Turkish regime comes with empty statements only issued by a person disconnected from reality,’’ the Syrian Foreign Ministry noted.

The statement made by the Syrian Foreign Ministry also underlined that ‘‘The Syrian Arab Republic reaffirms determination to continue its national and constitutional duties in combating terrorist organizations across the country and to rid the Syrians of their yoke, including the opening of safe humanitarian corridors as the Turkish regime-backed terrorist groups have impeded the exit of civilians through them to take them as human shields.’’

‘‘The Syrian Arab Republic reaffirms that any presence of Turkish forces on its territories is illegitimate and a blatant violation of the international law, and it holds the Turkish regime fully responsible for the consequences of that presence,’’ the Ministry concluded.

14 Turkish soldiers were killed and 45 were injured in two separate attacks carried out by Syrian government forces last week.

Turkey’s Ministry of National Defence announced that Turkish army targeted about 200 Syrian forces in Idlib, claiming that 51 units belonging to Damascus have been eliminated in retaliation attacks.