As the tensions between Ankara and Athens continue to rise in the Mediterranean, Turkey has issued a new NAVTEX for its military drills in the region last Friday. German Chancellor Angela Merkel said that all European Union countries have an obligation to support Greece in the recent dispute with Ankara over claims to natural gas and oil resources in the Eastern Mediterranean. 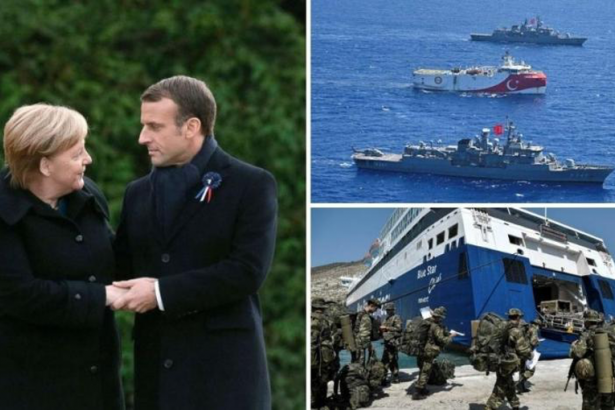 Potential discoveries of rich natural gas and oil reserves in the Eastern Mediterranean lead to a dispute between Turkey, Greece and the Republic of Cyprus over claims to drilling rights of energy resources in the region.

Moreover, Turkey issued a new NAVTEX, an announcement or warning of imminent maritime activity or exploration, on August 29 to carry out live-fire gunnery exercises until September 11 in a zone between the southern Turkish town of Anamur and north of the island of Cyprus in the Eastern Mediterranean.

On August 27, Ankara had issued a NAVTEX once again for live-fire gunnery exercises to be carried out on September 1-2, announcing that it has extended the seismic research activities of Oruç Reis, Ataman, and Cengizhan drilling vessels in the Eastern Mediterranean. Turkey’s NAVTEX came just after the announcement of the joint military exercise by Greece, Cyprus, France and Italy in the region.

TENSIONS IN THE EAST MED CONTINUE TO RISE

Turkish F-16 jets fought off six Greek F-16 fighter jets as they approached the region, in the south-west of Cyprus Island, where Turkey issued a maritime NAVTEX alert, the country’s Ministry of National Defence had stated on Friday.

‘‘Our naval and air forces continue to carry out their activities with an endless determination to protect our rights and interests in the Eastern Mediterranean,’’ the Ministry also said in its statement.

Speaking ahead of an informal meeting of the EU’s foreign ministers in Berlin earlier Friday, Greek Foreign Minister Nikos Dendias called for European sanctions on Turkey over its activities in the Eastern Mediterranean.

‘‘I am waiting with a great interest for the announcement of Josep Borrell [the High Representative of the EU for Foreign Affairs and Security Policy] on the options for sanctions on Turkey,’’ Dendias said of the EU’s foreign policy chief.

‘‘We consider this an absolute necessity in order to achieve a de-escalation in the Mediterranean,’’ he added.

As the tensions between Ankara and Athens in the Eastern Mediterranean continue to escalate, Turkish Vice President Fuat Oktay criticized the EU’s statement regarding the possibility of imposing sanctions on Turkey in case of a failure to solve the dispute in the region through diplomatic channels.

‘‘It is insincere for the EU to call for dialogue on the one hand, and make other plans on the other, regarding the activities we carry out in our own continental shelf in the Eastern Mediterranean,’’ Oktay noted via his Twitter account on Saturday.

Oktay also said, ‘‘We [Turkey] are well aware of peace and diplomatic language, but we will not hesitate to do what is necessary when it comes to protecting the rights and interests of Turkey.’’

‘‘If the Greek attempts to expand its territorial waters isn't a cause of war, then what is?’’, Turkish Vice President Fuat Oktay asked in an interview with Anadolu Agency, a state-run news agency headquartered in Ankara, stressing that ‘‘Turkey will protect its rights on every cubic meter in the Eastern Mediterranean waters no matter what.’’

On August 26, Greek Prime Minister Kyriakos Mitsotakis had said that his government would soon submit a bill extending Greece’s territorial waters in the Ionian Sea from 6 to 12 nautical miles.

Greece would thereby exercise an ‘‘inalienable sovereign right’’ in line with Article 3 of the Convention on the Law of the Sea, Mitsotakis had claimed.

As the Greek parliament approved the maritime accord with Egypt last week, Ankara announced live naval drills in the Eastern Mediterranean hours after.

Under the accord, Greece and Egypt are now allowed to seek maximum benefit from the energy resources in the determined exclusive economic zone, particularly natural gas and oil reserves.

The maritime agreement between Athens and Cairo is seen as a response to a similar accord signed between Turkey and Libya’s U.N-recognized Government of National Accord (GNA) in 2019, allowing Ankara access to areas with rich hydrocarbon reserves in the region.

The Athens-Cairo maritime accord also overlaps with maritime zones that Ankara agreed with Tripoli-based GNA last year, declared as illegal by the Greek government.

Underlining that Greece and Egypt had no mutual sea border, Turkey’s Ministry of Foreign Affairs had declared that the so-called maritime agreement between the two countries is ‘‘null and void.’’

‘‘Turkey will not allow any activity in these areas and will continue to resolutely defend its legitimate rights and interests in the Eastern Mediterranean as well as those of the Turkish Republic of Northern Cyprus,’’ Turkish Foreign Ministry added.

MERKEL: ‘‘ALL EU COUNTRIES HAVE AN OBLIGATION TO SUPPORT GREECE’’

During an annual press conference in Berlin, German Chancellor Angela Merkel said that she has discussed the ongoing disputes in the Eastern Mediterranean extensively with French President Emmanuel Macron, and stressed, ‘‘All European Union countries have an obligation to support Greece in the recent dispute with Turkey over claims to natural gas and oil resources in the region.’’

However, sources told that most of the EU governments, including Germany, seem to believe that putting pressure on Turkey in this issue will only harden its stance.

Despite Merkel’s statements, Germany is reportedly concerned about imposing sanctions on Turkey would undermine efforts to reach de-escalation between Athens and Ankara.

Meanwhile, Greece has sent troops to Greek island of Kastellorizo (officially Megisti-Meis), just two kilometres off the Turkish coast, amid rising tensions with Turkey in the Eastern Mediterranean on August 28. Images of Greek troops arriving on the island by a ferry carrying tourists were distributed by international news agencies.

Criticizing Athens for its military deployment to the demilitarized island under international law, Turkey call this act a provocation and underlined that Ankara is determined to protect all of its rights and interests in line with international law.

Speaking about the reports on Greece sending military deployment to the island of Kastellorizo (Megisti-Meis), Turkish Foreign Ministry Spokesman Hami Aksoy said that the island has had a demilitarized status since the 1947 Paris Peace Treaties.

Turkey will not allow such provocations to be carried out across its shores and rejects any attempts to change the status of Kastellorizo (Megisti-Meis) island, he concluded.