"Turkey is 11th front after 10 battlefronts in Syria's civil war"

soL news made an interview with the Syrian journalist Abdul Edip Fattah, who took refuge in Turkey but was deported recently. Talking about the policies of the AKP government and the increasing hostility towards Syrians in Turkey, Fettah says AKP exploited them in domestic politics because they were being used in the government's bargaining talks with Europe 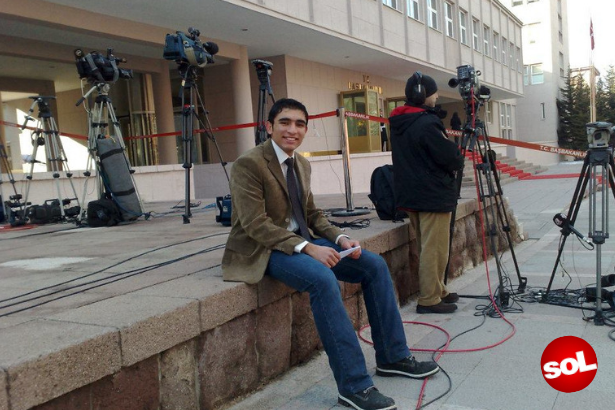 When the instigated civil war broke out in Syria eight years ago, Syrian journalist Abdul Edip Fattah sought asylum from Turkey but recently he was deported. Özkan Öztaş from soL news talked about the policies of the ruling AKP in Turkey and the increasing hostility towards Syrian refugees with Fattah.

"AKP exploited us from time to time in domestic politics as a side dish, while using us in its bargaining talks with Europe' said Fattah. He argued that, when the number of Syrian workers who lost their lives in Turkey is considered, Turkey can be viewed as the 11th front after the ten battlefronts the Syrians fought in the civil war.

When the provoked civil war broke out in Syria, Abdul Edip Fattah took refuge in Turkey and started working for the Syrian television in Ankara. But Fattah was deported recently and sent back to his country. During his stay in Turkey, he said he wasn't one of the most sought after Syrians whom the governing AKP fancied because he exposed their dirty politics. "They thought they were punishing us by sending us back to our homeland. But thankfully this is our motherland. So it wasn't a punishment at all but a reward instead," he said.

soL news talked with Fattah, the reasons behind the dangerously increasing hostility towards the Syrians in Turkey in recent times and the mumpsimus, the known misconceptions.

The hostility towards Syrian refugees in Turkey spread over time, is gaining weight recently. Now bureaucrats and political representatives have started expressing this hostility openly. How do you evaluate these developments? What do you think?

First of all, thank you. soL news was always with the Syrian people since the day the civil war began in Syria and released the realities of the war all over Turkey. In fact, not only confined to the Turkish public but also showed the people living in Syria that Turkey is not only made up of people who send weapons to Islamist gangs. I do not say this not only because I am a journalist, but also because I have heard it from many Syrian people.

The reaction against the Syrians is not new. It was there since the first day we actually arrived in Turkey. But the politicians bring this issue forward from time to time according to their political needs. I think they have abused and exploited this issue in accordance with their own policies.

AKP tried to look like the protector of Syrians to the Westerners. They made an impression that they welcomed, supported and helped Syrians. So what was really happening?

Yes, we heard and followed many of these discourses too. These were promising statements.  President Erdoğan said, “We will allocate TOKI (Turkish Public Housing Administration) houses to Syrians, we will give them allowances, we're spending money on these people to meet their needs” and these words were told not to Syrians but rather to Europeans. As a matter of bargaining and receiving money in return. Then he opened his hands to Europe and said, then why don't you support us?. But unfortunately this message was not heard in Europe, but the Turkish people took the heat. The Turks then started reacting, “wow our money goes to the Syrians, we pay their salaries”. But that's not the truth.

What was the truth then?

None of the Syrian refugees were getting housing nor salaries. They were all used as cheap labor. Most of them did not have social security. You know, too. We don't know how many Syrian workers were killed in occupational accidents. When you look at the number of Syrian workers who died in Turkey, the Turkish market could be considered as the 11th war front after the 10 battlefronts in the civil war in Syria.

How do Syrians look at the issue? What do they say about the reactions?

There are many voices. But some are purposeful and malicious. For example, the opposition in Syria today, and the groups receiving weapons from the United States and Turkey claim and disseminate information that it is the opposition parties in Turkey that these hostile reactions spring. It may not be as loud as it used to be, but the Syrian gangs announce that the reaction to the Syrians is not by the AKP but by the AKP opposition.

Syrians in Syria or in Turkey, are they aware of the situation?

Some Syrians are distressed. The ones who say, "we are already up to the creek without a paddle", are the ones who were forced to flee their country. "The AKP is benefitting from our anguish, commercializing over our miserable situation", they think. From time to time, the AKP exploits our situation in domestic politics, while holding us as a matter of negotiation with Europe. Syrians may be aggrieved but they're not stupid, they understand what's going on.

Was the AKP consistent in this respect?

The Syrians in Turkey? How are their terms? Aren't you being a little ungrateful? Didn't AKP embrace you with compassionate arms?

AKP's compassionate arms... (Laughing) I can not say the Syrians in Turkey are comfortable. Okay, they were working, but you know which conditions they work in. With very low wages and in very bad conditions. When a Turkish worker was getting  2000 liras wage for a job, a Syrian refugee could not even get a 1000 liras for the same job. The AKP sat back and watched this unfair situation. In a meeting where the AKP came side by side with the bosses, he clearly said,  "without the Syrian workers, many of you would have shut down your factories.” Can you imagine that? I think that kindness is too much for us. What can that kind of a political power boasting of cheap labor give Syrians other than exploitation?

Many racists or anti-Syrians in Turkey think that you just lay around and laze away, and instead of fighting for your country in Syria, they believe that you fled to Turkey? They accuse you of cowardice. Why did you come to Turkey? Are you a coward?

Yes, sir, we are a very cowardly nation. (Laughing)

Some, for example, could escape only to Damascus, because they were in Idlib. They took refuge in the army of Syria, and those living by the border to neighboring countries went to those countries. When confronted with fatal conflict they had to run away. Those who fled to Turkey did not necessarily choose Turkey but had to when collisions started. Where else could they go? Behind the border was Turkey, they were compelled to seek refuge in Turkey.

So what do we do, not to be called a coward?

So if we get guns from Turkey or the Gulf States and point them to our own country, to our own state and army, we will not be called a coward, is that so? Then shouldn't we be called traitors? I think this is a very hypocritical assessment. Then let me ask this question to those who blame the Syrian refugees. Why didn't they go with the Turkish army and fought in the occupied Syrian territory? It's easy to throw judgments over the social media, when they scream "Turkish soldiers to Afrin" then they are being very courageous. I think those who blame us are very brave in terms of being Syrian antagonists.

One more thing. We're civilians, sir. For example, I'm thirty, I've never held a gun in my life. How can I fight? How can I kill people? Who am I gonna kill? My brother? My father? I don't do that. I can not do that.

"No bread to Syrians, Syrians are not welcomed in our beaches, Syrians cannot take a taxi" sort of discourse is on the rise these days. Did you hear all about this?

Is it possible that we do not hear all about this?  But the question is so simple. This is a humanitarian test. It's not about bread, it's not about water only. Tomorrow we will come face to face as folks of two nations. It's a shame. We will either pass or fail this test.

How was your situation while you were in Turkey? Under what conditions did you live?

I had a profession and a job. But the situation of the unskilled Syrians working in very bad conditions is even worse. But there are problems that concern all Syrians. It doesn't matter if you have a profession or a job. First priority is security. When traveling from one place to another you think forty times. You live with the fear of deportation every day. You fear your house might be raided or burned down any time. We don't know when the police would stop and say, “What are you doing here?." We worked without social security. We didn't have a carefree day. For example, there comes a time that you have a relative in a different province who needs medical care, but then you might wait two weeks to get permission. Now that you've asked, I cannot think of all the problems right away, of course, I can tell you hundreds of problems. Maybe it's better that I don't remember them now. Forgetting might be a better option.

And now, you've just been deported recently, and you're back in Syria. Why were you deported?

I didn't behave myself (Laughing). I was a journalist. I was working for Syrian TV as the Ankara correspondent. We have come side by side with you many times. I've relayed all the activities of the Communists towards Syria to those living in Syria.

In short, we were not among the Syrians AKP fancied. We were constantly criticizing. We exposed their dirty policies. We interviewed opposition politicians in Turkey and have relayed continuous interviews to newspapers and television. Of course, they deported us because our tongue did not fit in our mouths. But while we were trying to work in Turkey, the Syrians in Syria didn't give up fighting. They cleaned out the gangs on many fronts and in the cities. Now I have come back to Syria comfortably. They punished us by deporting. But thank God this is our homeland. We're happy here. It was a reward, not a punishment.

Thank you for this interview.

I thank you for everything, that you never left us alone both in Turkey an in  Syria.