Towards a Turkish offensive in Syria: AKP seeking adventure 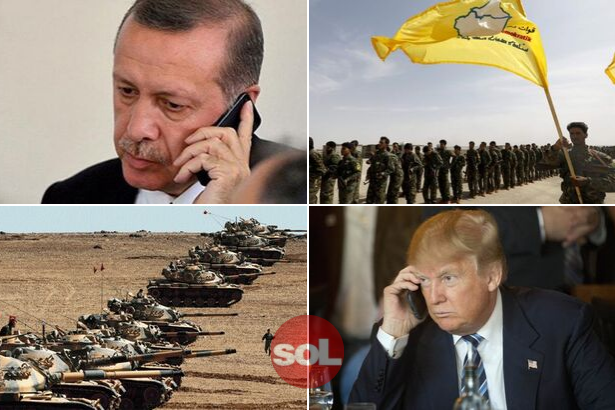 Turkey is drifting towards a new impasse in Syria. The process, which started with Erdoğan's statements at the UN, is at a critical stage with the Pentagon's statements and the SDF's decision not to withdraw.

WE ARE ABOUT TO LAUNCH AN OPERATION: ERDOĞAN

Speaking on Wednesday, September 25, at the session of the United Nations (UN) 74th General Assembly, “Megatrends Impacting the Achievement of the Sustainable Development Goals”, the Turkish President Erdoğan stated that Turkish Armed Forces was preparing for a military operation towards the east of Euphrates.

On the 30th of September, in The National Security Council (MGK) meeting held under the presidency of Erdoğan, it was stated that Turkey’s sincere efforts would further strengthen the implementation of the ‘Safe Zone' in Syria.

Turkey's Minister of National Defense, Hulusi Akar, told the US Defense Minister Esper that efforts towards the safe zone will end in case of any delay.

The decision, which was signed by Erdoğan and published in the Official Gazette on Friday, October 4, added a new unlawful move to the ruling AKP's plans on Syria. It was announced that Gaziantep University would establish faculties in Al-bab, Azez, and Afrin.

Syrian Foreign Minister Walid Muallem said that Turkey with the US, which has been planning to build a ‘safe zone’ in northern Syria would create instability and chaos.

The statement sparking all the latest developments was made by Erdoğan at the opening of the AKP camp in Kizilcahamam district of Ankara on the 5th of October. He said that “we have made preparations for the possible operation to Eastern of Euphrates and we have instructions.”

IT WILL CAUSE SERIOUS CONCERNS: PENTAGON

Following Erdoğan's claims, a statement came from the Pentagon about the possible Turkish military intervention in Syria. Pentagon spokesperson Sean Robertson said that a possible unilateral operation against Rojava would lead to serious concerns for the US.

SAFE ZONE IS A MUST: TRUMP

A press release from the Presidency of Turkey's Directorate of Communications mentioned the telephone conversation between Erdoğan and Trump.

It was said that “While the discomfort resulted from US military and security bureaucracy failing to meet the requirements of the agreement between the two countries was shared with Mr. Trump, Mr. President stated that a safe zone is essential for the elimination of the terror threat of PKK-YPG and for the maintaining conditions for the return of Syrian refugees to their countries."

WE WILL NOT GET INVOLVED IN THE OPERATION: THE WHITE HOUSE

The White House later announced that “Turkey will take action for a long-time planned operation to the north of Syria. The US Armed Forces will not support or be involved in this operation."

WE WILL DEFEND OUR AREAS: SDF

After the statement of the US, the Syrian Democratic Forces (SDF) made a statement. According to Reuters, SDF announced that the US troops in northern Syrian began withdrawing inward from the border of Turkey. SDF stated that the US does not keep its promise to them, declaring they will protect their areas against the operation.

WE SUPPORTED ITS TERRITORIAL INTEGRITY

On Monday morning, Turkish Foreign Minister Mevlüt Çavuşoğlu said: “We have supported the territorial integrity of this country since the beginning of the crisis in Syria, and so it shall be.”

Speaking at the airport before his visit to Serbia, Erdoğan said about the condition of thousands of IS terrorists in prisons after the withdrawal of the US from the region: “These figures are a bit exaggerated. There are prisoners in both there and here. They say they are working on giving the control of them to another.”

IT MAY LEAD TO A NEW INFLUX OF REFUGEES: GERMAN PRESS

In Germany, the local press has brought up the announcement of a possible operation by Erdoğan to the agenda at the weekend. German press comments compiled by Deutsche Welle show that the operation may lead to a new influx of refugees.

WE ARE PREPARING FOR THE WORST

UN Humanitarian Coordinator for the Syrian Crisis, Panos Moumtzis who spoke to reporters in Geneva about Turkey’s possible operation against Syria said that they did not know what would happen and they were preparing for the worst. “Unanswered questions are too much. We are in contact with all the participants,” he added.

TERRITORIAL INTEGRITY MUST BE ENSURED

“A delegation from the YPG will be in Damascus within a few hours”, Lebanese journalist Nidal Hamade said.

TIME TO GET OUT OF THESE RIDICULOUS ENDLESS WARS

President Donal Trump on Twitter wrote: “The United States was supposed to be in Syria for 30 days, that was many years ago. We stayed and got deeper and deeper into battle with no aim in sight. When I arrived in Washington, ISIS was running rampant in the area. We quickly defeated 100% of the ISIS Caliphate including capturing thousands of ISIS fighters, mostly from Europe. But Europe did not want them back, they said you keep them USA! I said “NO, we did you a great favor and now you want us to hold them in U.S. prisons at tremendous cost. They are yours for trials.” They again said “NO,” thinking, as usual, that the U.S. is always the “sucker,” on NATO, on Trade, on everything. The Kurds fought with us but were paid massive amounts of money and equipment to do so. They have been fighting Turkey for decades. I held off this fight for almost 3 years, but it is time for us to get out of these ridiculous Endless Wars, many of them tribal, and bring our soldiers home. We will fight where it is to our benefit, and only fight to win. Turkey, Europe, Syria, Iran, Iraq, Russia, and the Kurds will now have to figure the situation out, and what they want to do with the captured ISIS fighters in their “neighborhood.” They all hate ISIS, have been enemies for years. We are 7000 miles away and will crush ISIS again if they come anywhere near us!”

WITHDRAWAL WILL NOT BE LARGE-SCALE

The US authorities stating that withdrawal will not cover more than dozens of soldiers said that the area where troops are being withdrawn is limited to the area defined with Turkey to establish a safe zone.