TKP issued a statement after the local elections: "TKP will not allow two-party system" 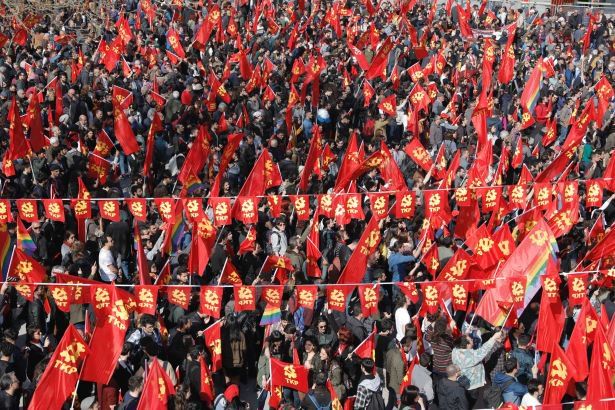 TKP issued a statement after the local elections. Declaring that the party will not allow the two-party system that started to be considered as the normal in Turkey today, TKP stated that despite the system seems to be a two-party system in the elections and despite all the difficulties, pressures and restrictions, Turkey's communists have increased their votes radically.

1- The crisis of the AKP, that came to power 17 years ago, has deepened. The elections have turned into a crisis not only for the AKP but also for the opposition parties which are complying with the AKP regime. Immediately after the elections, calls for normalization by the representatives of capital may postpone the crisis, temporarily. Yet Turkey enters into a severe economic, political and social crisis.

2- It is also clear that the main opposition party, which won Ankara and Istanbul municipalities, with the two candidates, first one being originally from the nationalist party MHP and the other having Islamist tendencies, has entered into a crisis of its own. The anti-AKP rage, which had accumulated in the society for 17 years, was once again condemned to the ideology of the AKP with the help of CHP. It is impossible to create a success story or any sort of hope for the people from this picture.

3- As the representative of a broad alliance, the candidate of the Communist Party of Turkey, Fatih Mehmet Maçoğlu, has won the Dersim provincial municipality. This victory has a historical significance in Turkey. Together with our friends, we will do everything we can, in order to extend the perspective of “people’s municipality”, to the provincial level. We congratulate the people of Dersim for their decisions.

4- The Communist Party of Turkey succeeded in these elections, which gives sort of a two-party system impression, with radically increased rates of votes despite all the challenges, impositions, and restrictions. The Communist Party of Turkey received more than 130 thousand votes for the municipal councils. In the three major metropolitan cities, there was a remarkable increase in the party's votes, and in Urla, Balçova, Narlıdere, Çeşme (of İzmir) and Beşiktaş (of İstanbul), TKP’s votes have exceeded 1% of the votes cast in that district. Of note is the percentage of TKP votes in Urla, which is 2%.

5-The Communist Party of Turkey received high rates of votes in some districts that it aimed to govern as examples of people’s municipalities but did not succeed due to some last minute developments. TKP does not and cannot confine itself to elections. Indeed, the communists have been expanding in dozens of new districts and neighborhoods and we do not see the outcome of these mentioned districts as a failure. On the contrary, we consider those areas as our new holds.

6- In terms of the mayoral elections, in which voter’s decisions are under many different influences and local balances, the Communist Party of Turkey has increased its votes, too. There might have been the fact that some of the votes cast for TKP were “votes of protest”, but the results clearly point that the party has created its own base since last year. Those who want to overthrow the system in Turkey and to establish a socialist country have cast their votes for the communists.

7- Those voted for the Communist Party should keep in mind that their will has a significant outcome: Hope is flourishing in Turkey. Our party is working on the detailed assessments of the election results and launches an even more intense period of work than the electoral period, so that the people of Turkey will not be condemned to the order of capitalists, imperialists, and reactionaries with whom “we are not in the same boat”.

8- We are thankful to all citizens who voted for us or supported us in various ways.

9- Once again, we call on those whose hearts are with the TKP to join our struggle. We will be stronger together: If money has its reign, working people have their Communist Party!