TKP: "The people of Turkey will not respond with a Tweet!" 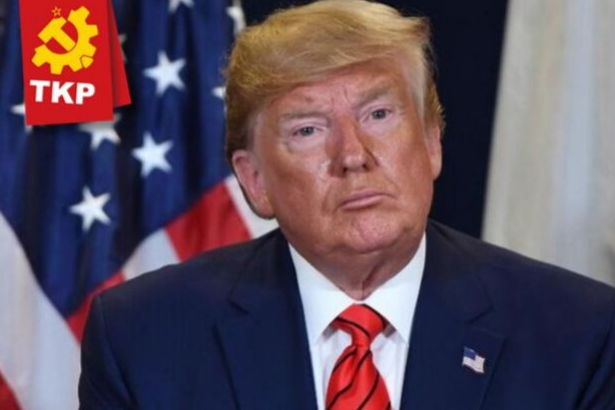 “As I have stated strongly before, and just to reiterate, if Turkey does anything that I, in my great and unmatched wisdom, consider to be off limits, I will totally destroy and obliterate the Economy of Turkey (I’ve done before!),” Trump said on a possible military operation of the Turkish army in northern Syria.

The CC of the Communist Party of Turkey has released a statement regarding the tweet of the US President threatening Turkey. The full statement is as follows:

TKP: THE PEOPLE OF TURKEY WILL NOT RESPOND WITH A TWEET!

Trump, the President of the United States of America, has declared a war on our people via social media. Neither does the background of the statement of this person who is talking about “destroying the economy of Turkey” matter, nor its justification or the pressure within the US internal policy that has resulted in this statement. What matters is that Trump has said for the second time that he would destroy the economy of Turkey.

First, Trump is one of the most impudent and tyrant servants of the US imperialism. He is trying to rule the entire world through the power of money or arms while he is attempting to regain the hegemony of the US that has shattered within the international arena.

Second, Trump is also a loser. He has to make new moves every hour in both foreign and domestic politics for his personal salvation.

Third, Trump is a liar. He is lying to everyone, the entire world, his people, and his friends if he has any. Moreover, Trump is making things up. The challenges that the Turkish economy faces do not only arise from the interventions of the US but the structural problems of Turkish capitalism play a decisive role in the weaknesses of the Turkish economy.

However, the problem is not Trump himself; in the final analysis, Trump is acting in harmony with the interests of US imperialism. The inner contradictions in the US never change this truth.

Therefore, the one who threatens to destroy the Turkish economy is not only Trump but also the hegemonic class of the US.

That said, who would be impacted by the possible sanctions of the US? The hegemonic class of Turkey, the bosses, would lay the burden of the problems of these sanctions on the shoulders of our working people yet again as it always has been before was. New rises in prices, in other words, higher cost of living, wage cuts, layoffs, extra taxes on the wage earners... And they would present what is left in the country to international monopolies for them to exploit more.

Therefore, Trump's threats are actually addressed to our people who are forced to pay for the economic crisis. It is our people who have been oppressed for years by the political powers in our country who made friendship talks with the US and European imperialists. It is our people who were condemned to the darkness of AKP, the power that boasted of being a "strategic partner" with the US before entering into a dispute with Trump and the power that owes its rise to the government to the support of the US many years ago. Our people do not have a problem with the peoples of the US or other countries. Our people have a problem with the exploiters, bigots, imperialists.

So now is the time to shout loudly:

- Shut the Incirlik base down, deport all US military personnel!

- Instead of negotiating behind closed doors with the US and Russia over Syria, establish a relationship with the Syrian government and abandon any implicit or explicit annexation policies in Syria immediately!