TKP delegation including the General Secretary of the Communist Party of Turkey (TKP), Kemal Okuyan, paid a visit to Fatih Mehmet Maçoğlu, the communist mayor of the eastern province of Dersim 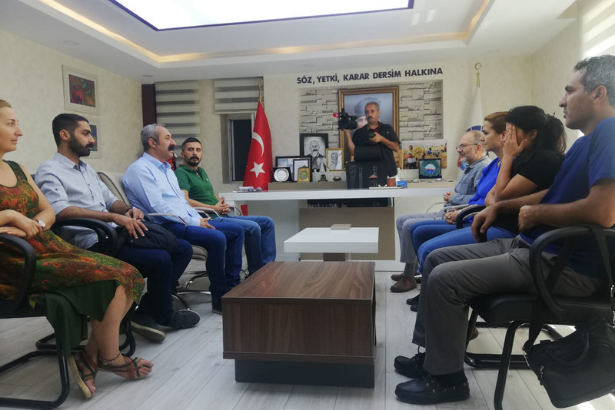 The mayoral candidate of TKP, Fatih Mehmet Maçoğlu, won the local elections in Dersim on March 31, making Dersim the first city to be governed by the communists in the history of Turkey. The General Secretary of the Communist Party of Turkey Kemal Okuyan and a party delegation on Wednesday visited the communist mayor in Dersim.

“Not only Turkey but also the world has an eye on us. As we previously said, we will not transit to communism here in one place, yet we need to show what the communists can do. So we will show. We will create a good example of municipal works,” Okuyan said during the visit of the TKP delegation.

Okuyan underlined that the devastation of capitalism in Turkey and around the world is so huge that all the works of the communists are very precious.

“WE NEED TO BOOST PEOPLE’S SELF-CONFIDENCE”

“They devastated these cities so much that we have had to start from the very beginning. Along with this disadvantage, what is advantageous is that even the slightest improvements are distinguished immediately. We need to benefit from this fact in order to boost the people’s self-confidence,” Okuyan said, adding that everything can be done as long as the people are conscious of that they are the rulers.

Maçoğlu thanked Okuyan and the TKP delegation for their visit, informing them about the municipal works in the city of Dersim.

Indicating to the inadequacies along with the accomplished works in the city, Maçoğlu said, “I believe that we will overcome them altogether; and with your support, we will serve a good example of municipal works.”