TKP: 'Communists stood for the struggle for Republic'

The Communist Party of Turkey (TKP) released a commentary on the 101st anniversary of May 19, 1919, as the beginning of Turkey’s War of Independence leading to the modern Republic of Turkey. 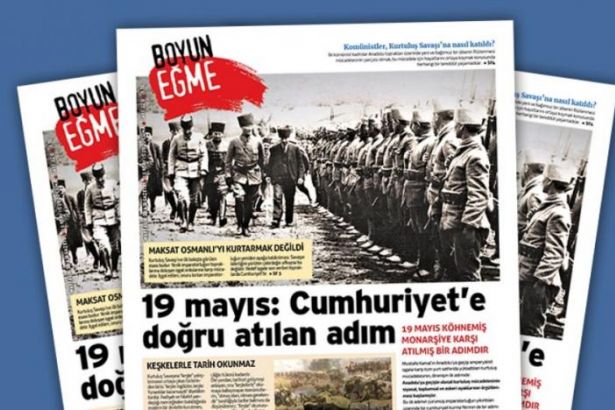 Boyun Eğme ("Do not Surrender"), the weekly political magazine of the Communist Party of Turkey (TKP), devoted its pages to the anniversary of May 19, 1919, the beginning of Turkey's War of Independence and published a TKP commentary on the thread.

In the commentary, TKP stated that May 19 is a step taken against the rotten monarchy. Underlying that Mustafa Kemal’s decision to move to Anatolia from İstanbul, the capital under imperialist occupation, was the first step of the resistance and liberation struggle that has been raised all over the country, TKP’s commentary continued: ‘‘With Mustafa Kemal’s stepping ashore to Anatolia, the organization of the political, social and military aspects of the national liberation struggle began. Mustafa Kemal did not hide that this first step was a move towards the idea of ​​establishing a republic on the ruins of the rotten empire. Those who thought that May 19 was a step to throw out the invaders from the occupied imperial lands and give the sovereignty back to the Osmanoğulları dynasty did not understand anything from the history of 101 years. Moreover, those who ignore the class struggle cannot see how Turkey surrendered to imperialism in a few decades after the national struggle for liberation triumphed.

TKP concluded its commentary by emphasizing that the communists have stood for the struggle for the Republic and they were among the ones who have taken up arms to end the occupation: ''Our horizons go beyond the horizons of the pashas. Our history consciousness, on the other hand, does not hesitate while saluting those who have brought a new order from the collapse of a reactionary empire.''