TKP calls for strengthening hope on May 1 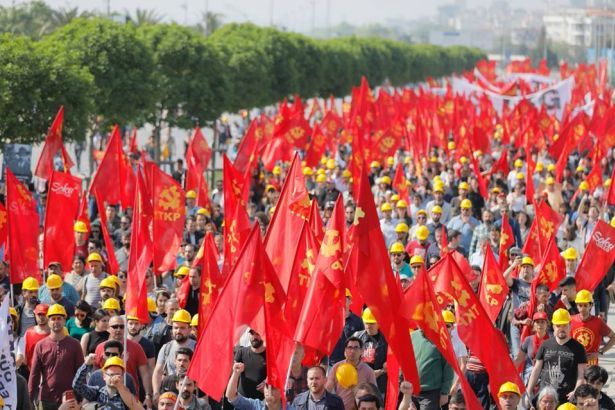 Demonstrators are going to take part in May 1 events in Turkey’s biggest city, as well as other big cities, Ankara and İzmir. Similar demonstrations are going to take place across the country, including Antalya, Bursa, Dersim, Eskişehir, and others, with the participation of the Communist Party of Turkey (TKP).

Tens of thousands of workers and activists are expected to hit streets with TKP in metropolises for International Workers’ Day rallies. TKP has used the slogan “Join May 1 with TKP to strengthen the hope” in its call for the demonstrations.

Boyun Eğme ["Do not Surrender"], the weekly political magazine of TKP was published as a statement May 1 this week, calling the working people of Turkey to join TKP in rallies.

"NOT TO LET CAPITALISTS TO BENEFIT FROM THE CRISIS"

On the cover page of the weekly Boyun Eğme, it is noted that the March 31 local elections in Turkey showed that those saying “this order must change” have been increasing.

“We all know and see how this reality created hope and made the working people feel more confident. It is clear what we should do on May 1: Demonstrate our power to strengthen the hope of the working people and to displease the capitalists,” it adds.

The statement in the weekly magazine also points out that the economic crisis in Turkey is going to become more severe, but what is worse for the working people is the capitalists' tendency to benefit from this crisis by suppressing the working class even more.

"They [capitalists] rely on the fact that the working class is unorganized. An organized working class will not surrender to the threats of unemployment, death, and hunger. That is why we should force these capitalists to think twice before benefiting from the crisis," the statement says.