The Communist Party of Turkey invites people to struggle and organize against the Turkish government’s new supplementary pension scheme, which will abolish the workers’ severance pay so as to further ease the capitalist class in the country. 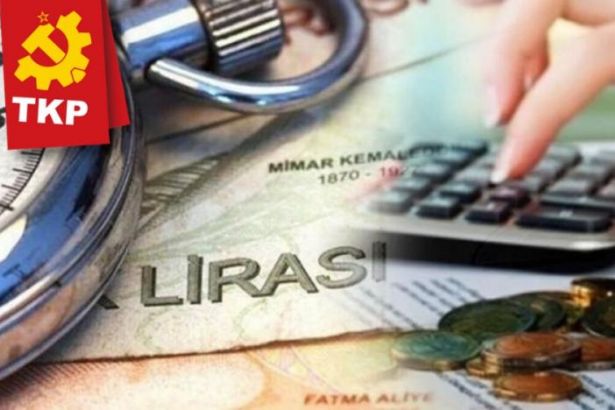 As the Communist Party of Turkey (TKP) points out the imperilment of workers’ right to severance pay in the country, it calls on people to raise their voice against the injustice readjustment of the ruling Justice and Development Party (AKP) government protecting the interests of the capitalist class under the pretext of ‘‘increasing the employment’’.

Urging people to not to keep silent against the government’s usurpation of workers’ severance pay, TKP has laid emphasis on the necessity of rising solidarity and an organized working class in order to resist the government’s recent anti-labour policy.

Noting that the Turkish government in collaboration with the capitalist class aims to force workers to work under much more flexible working conditions, TKP stated, ‘‘The name of the government’s new attack on workers’ right is ‘fixed-term employment contract’. Whenever an economic crisis erupts and unemployment increases, the capitalist class and its representative ─ political power ─ encroach our rights to reduce labour costs under the pretext of ‘alleviating the unemployment’. Yet, unemployment has already boomed in the country.’’

‘‘We are once again in an economic crisis. This time the crisis is accompanied by a pandemic crisis, COVID-19. And the government is trying to put its unchanging plan into use: Setting its eyes on the workers’ right to severance pay so as to prevent profit erosion for the capitalist class.’’

Reminding that Turkish government’s recent agenda is the abolishment of severance pay via new ‘‘supplementary pension scheme’’, TKP underlined in its statement, ‘‘This readjustment will pave the way for the employment of workers under 25 and over 50 with fixed-term contracts, which will cause the elimination of severance pay for them while the retirement will become more difficult.’’

‘‘This is the rule of the bourgeoisie…If there was a rule taking sides with the people, it would protect the rights and interests of the working class, providing the conditions for the workers to live humanely,’’ TKP continued.

Underlining that the emancipation of labour is impossible without the establishment of the rule of the working class, TKP added, ‘‘A political power slanted towards the working class would not consider usurping the rights of workers to sustain production and it would never throw the entire weight of the economic crisis onto the workers’ shoulders.’’

‘‘The only way to stand out against the attacks on labour rights is the workers’ struggle. The history has shown that only those fighting against the oppression and injustice triumph.’’

‘‘To protect labour against lies of those who claim they will secure workers’ severance pay and to build a better future without the capitalist exploitation, we call on people to raise their voice, strengthen the solidarity, and organize!’’ TKP concluded its statement.