Thousands took to the streets in Hanau city to protest the fascist attack of February 19 against two coffeehouses as nine people, 5 Turkish citizens, were killed while many were injured. The Germany branch of the Communist Party of Turkey (TKP) released a statement. 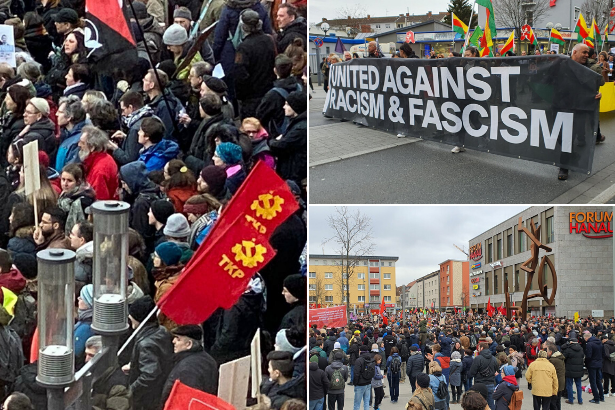 Nine people, who were murdered in a cafe by a 43-year-old gunman in Hanau, near Frankfurt, Germany, were commemorated on Saturday with thousands' meeting and march in Hanau. Five of the killed people were Turkish citizens.

The members of the Communist Party of Turkey (TKP) also attended the demonstration on February 22 to protest the murder and the policies that do not take measurements against fascist attacks.

The relatives of the killed people addressed the protesters during the rally. “This fascist attack caused suffering because the German government turned a blind eye to the rising far-right parties,” a woman said.

A moment of silence for the victims of the attack took place during the rally. Then the protestors marched in the city with the photographs of the victims and some banners. “United against racism and fascism!” was one of the slogans. The members of TKP distributed leaflets including the statement of the communists during the protest.

The full statement of TKP against the fascist attack is as follows:

You were all there!

On the night of February 19 in Hanau city, there was an attack against two coffeehouses in a neighborhood where mostly immigrants live.

The suspect Tobbias R. is publicized as “extreme right-wing”, “with distorted worldview” and “lone wolf”. Likewise, the suspect shared a video containing "personal messages" and a 24-page letter before the attack. It is attempted to give the impression that the suspect, who was found dead in his home with his mother, had committed suicide.

“This is an attack on our free society,” said Peter Beuth, the Hessian Minister of the Interior and Sports.

The President of the European Parliament, David Sassoli, tweeted that he is shocked with this incidence as if the Parliament did not attempt to compare fascism with the Soviet Union that defeated fascism and the communist parties that took part in courage and determination in this great struggle under the title of “totalitarianism”.

İbrahim Kalın, the Presidential Spokesman of Turkey, preached to the choir “Racism is a collective cancer”.

There are no limits to rhetorical clichés and the hypocrisy!

On 19 December 2016, in the incident that Anis Amri murdered 12 people and injured 67 people in Berlin, the suspect was “captured” in an operation. Then, it was understood that the Federal Intelligence Service preferred to be a mere spectator throughout the whole process.

While the corrupted imperialist and capitalist order is privatizing the monopoly of violence under the control of capital, its individual-looking terrorism was placed as a third and new category in state terror and next to its paramilitary terror.

The "individual" terror actions of Breivik in Norway, Tarran in New Zealand, Amri in Berlin, Tobbias R. in Hanau and many others have been taking power and support from this base.

The German fascist movement, which has recently got out of control, knows very well that the neo-Nazi infested BND will do nothing against them. The most striking examples of these were the NSU murders and the following trial of NSU, ”the organization of three people”, which ridiculed the public opinion.

As a result of the events such as the Constitutional Court not being willing to shut the Nazi party called NPD down or PEGIDA being referred as “groups of angry citizens”, the fascist mass party named AfD became the main opposition party in the German Lower House of Parliament.

According to the official reports, German fascism, which has grown fivefold in the last eight years, has been attempting massacres with licensed weapons obtained from the shooting clubs they practice upon shooting. In the massacre of Hanau, the fascist named Tobbias R. followed the same path.

This society that Hessian Minister of the Interior and Sports Beuth described as “the free society" is an exploitative and capitalist society in which the freedom of fascism is guaranteed. Capitalist society cannot be exempt from racism because inequality is dominant in its nature.

What İbrahim Kalın describes as “the collective cancer” is the society of exploitation and chauvinist/religious bigotry where he and his party are fed upon.

Another promoter of Tobbias R. is the hypocrisy of the President of the European Parliament, Sassoli, who tries to compare communism and fascism.

You were all there!

We demand as the Germany Branch of the Communist Party of Turkey:

·         Shut down all racist, fascist organizations, associations and parties!

·         Purge racist and fascist structures in the German police, intelligence and judicial system!

·         The German working class is the primary target of German fascism. Do not tolerate racism with ethnic or religious justification!