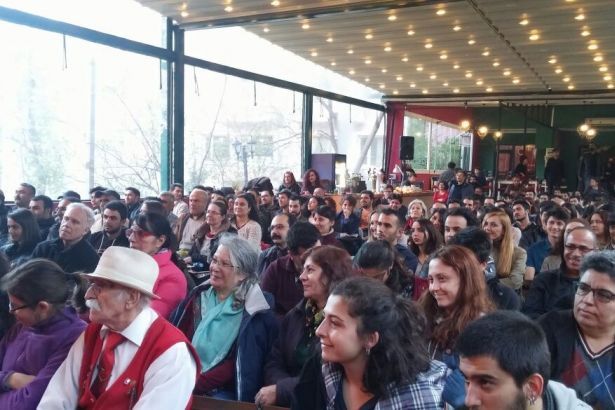 Workers in Ankara met at a panel held by the Communist Party of Turkey (TKP) in Ankara on the upcoming presidential referendum.

As the first speaker of the panel, Erhan Nalçacı elaborated on the final crisis phase of capitalism since the last decades with no sign of the exit. He stated that Turkish capitalism tried to find solutions to this crisis in the 1980s with the September 12 military coup and January 24 neoliberal economic policy plan; in 1990s with Kemal Derviş, the minister of Economy then; and finally in 2002 with Justice and Development Party (AKP). Although each period was marked by different political stances, Nalçacı said, each of them was stench public enemies.

Commenting upon the recent military intervention of the US to Syria, Nalçacı said that the working class should never be a part of imperialist wars and thus should get rid of the dominant class.

REFERENDUM IS A GAMBLE FOR PRESIDENT ERDOĞAN

Özgür Şen, the other speaker of the panel, noted that although the general public opinion has been waiting for the referendum as a solution for the atmosphere of uncertainty in Turkey, the referendum result will not be a final answer for that.

He reminded that the uncertainty is related to the crisis of capitalism in Turkey, and imperialism itself that is expected to solve the crisis of Turkey also undergoes similar uncertainties.

"If the route of Turkish bourgeoisie were clear, and there were no political tensions with imperialist centres, there would be no uncertainty in Turkey", Şen said, adding that that's why President Recep Tayyip Erdoğan is taking this gamble of the referendum.

Commenting on the "no" campaign of the Communist Party of Turkey, Şen said that the communists have been campaigning for a no vote in the referendum from the heart, as opposed to other mediocre "no" vote campaigns. The difference mainly stems from the political stance of the communists pointing at the uncertainties awaiting the post-referendum phase, he said, and the communists are not afraid of struggling with those uncertainties. "No" result will ease working class struggle in Turkey and yet it will not be enough, he added.

Özgür Şen said that the "no" campaign of the communists have been systematically and deliberately restrained because TKP has been trying to minimise the uncertainties of the post-referendum phase. He added that the communists will try to direct a possible "no" result in the referendum to proper channels. A possible "yes" result will not solve any problem of the AKP government, Şen said, adding that it will cause an irresolvable social tension in Turkey.