Shangri La: The hotel thrown into the sea in Turkey

Communist Party of Turkey (TKP) CC member and soL columnist, Mehmet Kuzulugil, writes on the history of the Shangri La Hotel in Istanbul facing another Shangri La from 51 years ago, the US aircraft carrier whose sailors were thrown into the sea by the revolutionary young people of Turkey 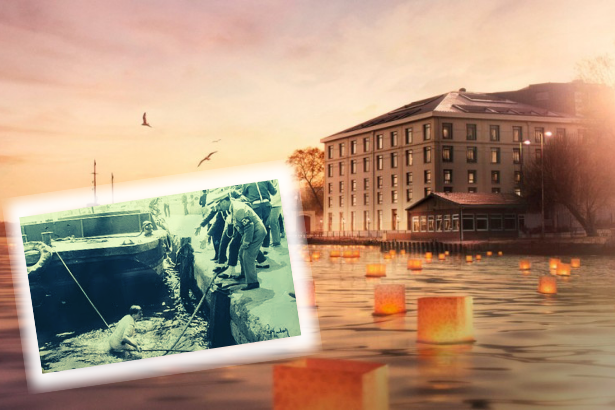 Today, in Istanbul's Besiktaş, there is an aircraft carrier right next to the Prime Minister's Office: Shangri La. 51 years ago, it was the aircraft carrier of American troops, who were caught by the young revolutionary people of Turkey and thrown into the sea.

Although Beşiktaş is no longer popular as it used to be, it still hosts a small palace surrounded by water cannon vehicles, sniper rifles and police carrying sniper rifles.

This settlement, which was turned into the Prime Minister's Work Office from the district governor's office, is known for the security measures taken. And there is a hotel right next to this very secure office.

Shangri La, a chain of 5-star luxury hotels that have spread to all continents but mostly settled in China, has a branch in Beşiktaş, too.

Shangri La was also the name of an aircraft carrier in the 6th fleet of the US that came to the Bosphorus on July 18, 1968.

It is well-known that Tanrıverdi family agreed with Shangri La after they destroyed the old tobacco bureau, used their “right to build a hotel" and started to think whose hotel they could make it. In those years, the “historical” meaning of Shangri La had taken its place in the newspapers: The name of the aircraft carrier, whose sailors were thrown into the sea by revolutionary young people in July 1968, has become the name of a very luxurious hotel overlooking the Bosphorus.

Murat Yetkin [1] recently mentioned this fact in his book "Intrigues for the Curious". According to Yetkin, Duane Clarridge, who deserves to be called the "Prince of Darkness" and who was just appointed as the CIA's station chief in Turkey, watched the sailors of Shangri La being thrown from the window of an apartment in Kabataş.

What was written so far about the meaning of the Shangri La hotel being built facing the waters where Shangri La aircraft carrier was anchored was only “pointing out something”. Murat Yetkin’s comments are also giving some hints (actually very clear hints): Is this hotel the symbolic revenge of the view the CIA station chief saw in his first days in office?

WHO IS THIS SHANGRI LA?

Shangri La is a chain of luxury hotels. The chain has branches all over the world. Southeast Asia, Australia, the Middle East, Europe, and Africa... Of course, in North America, too, but not including the United States. Two of the Shangri La hotels in the continent are located in Toronto and Vancouver.

Before we go into the history of hotels, let's briefly mention the meaning of the word: Shangri La describes a kind of heaven on earth in Chinese. What makes the term famous is an American writer's novel titled Lost Horizon.

The Shangri La chain of hotels took its first step in 1982. When the Chinese-origin Malaysian businessman Robert Kuok decided to go into the business of hotels, he started with the US company Westin Hotels. They actually had Shangri La hotels, the first of which was built in 1971 and the second one in 1981, but they handed over their management to Westin.

In 1982, when Shangri La became a company, it transferred two executives from the American Westin and accelerated the rise.

Let us take a break from the history of Shangri La hotels and turn to the “boss”. Robert Kuok is the son of a family who immigrated to Malaysia from the Fujian region of China in the early 20th century. He was born in Malaysia in 1927 in the British colony and studied at a school called Raffles School in Singapore. Tun Abdül Rezak and Tun Hüseyin On are among his friends at this school. Both later served as Prime Minister of Malaysia! Another school friend was Li Kuan Yu, Singapore's first prime minister after independence.

World War II interrupted his education but enabled him to give rise to "guanxi", a Chinese term meaning “networking”. Kuok started working for Mitsubishi when Singapore was invaded by the Japanese! He also learned Japanese.

When the war ended, he saw that the rice market, which he had focused until then, had lost its appeal with the decline in profit margins and turned to the sugar market.

When Malaysia gained its independence in 1957, it was Kuok's guanxi that made him the "King of Sugar”. He entered the sugar refining business in 1959.

He got the name "King of Sugar" at a time when 10 percent of the global sugar market was under Kuok's control.

When the demands for "economic equality" increased in Malaysia, where a minority of Chinese origin dominated the economy, the King of Sugar moved to Singapore.

He started to reach out to the media sector after trade and transportation: he became the owner of the South China Morning Post.

Then came the business area for real growth: Real Estate! From here comes the hotel business in the 1980s.

A distinctive feature of Shangri-La is that unlike other hotel chains, hotel properties mostly belong to the Kuok dynasty. Kerry Properties is the dynasty's parent company.

In Mr. Kuok's commercial career, we do not seem to have much about the 6th fleet. Let's underline the man's ability to continue to work and prosper under ever-changing political atmosphere. The Japanese, the British, the local governments of Malaysia, Singaporeans, etc. Magnificent wealth that comes with magnificent guanxi...

Let us continue with the Chinese-origin Malaysian Robert Kuok's relationship with China from the 1970s.

Kuok’s Kerry Properties initiative is a Hong Kong-based company with a significant wealth of real estate across mainland China to Australia.

In 1984, Mr. Kuok opens his first hotel in China. Then the rest comes.

A hotel they opened in Beijing in 1989 shows their new brand: Traders. This new chain serves for longer stays at more modest prices.

You must have felt that we were coming to the Tiananmen days!

But again, let's make another return: One of the interesting aspects of Kuok is the fact that he appears immediately during political fluctuations in Southeast Asia. He made investments in Indonesia in the 1960s. Kuok was one of the investors in Indonesia when hundreds of thousands of communists were massacred in a few months with the intelligence provided by the CIA during the years when Indonesia was in political turmoil.

When the dictator Marcos "flew" from the Philippines in 1986, Kuok headed for the Philippines: while he was unable to do business in this country during the period of Marcos, the ways for him were now open, as he said in those days.

Now the days of Tiananmen: Mr. Kuok is very unaffected. He managed to maintain a consistent dialogue with the executives, he said.

In June 1989, Kuok was in the middle of the construction of the China World Trade Center. This $ 530 million investment is a giant building in Beijing city center in partnership with the Chinese government. While banks and construction companies panicked, Kuok did not leave the investment. Construction was delayed a bit, but according to an analysis published in 2012, the Chinese WTC was a structure with a return of $ 90 million each year after deducting taxes.

COCA-COLA IN CHINA? STOP THERE!

When Coca-Cola decided to enter the Chinese market, it was Mr. Kuok that they found without any hesitation.

Kuok was the first choice for two reasons: First, the Malaysian/Singaporean/Hong Kong capitalist Kuok had the courage to do business with China's "communist bosses" in China. Second, Kuok was very open to cooperation and do business with foreigners as opposed to China's local entrepreneurs.

The number put forward as proof of this is the share of the “non-family partnership" in the three family holdings. That's 30 percent!

BACK TO OUR BOSPHORUS TOUR

The Turkish capitalists chose the Asian Mr. Kuok for the management of a luxury hotel overlooking the Bosphorus in the 2000s.

Let's keep this part of the story short and take Recep Tanrıverdi into the picture quickly.

A medium-sized business owner in textile, Recep Tanrıverdi is from Turkey's Samsun and the owner of the “Verdi" brand. For the hotel he opened in Samsun, "The person at the head of the state told us to build a hotel, so we built," he says. We don't know what the head of the sect said, but the Tanrıverdi brothers were taken into custody in a Fethullahist Terrorist Organization (FETÖ) investigation in 2016, and Ibrahim Tanrıverdi's statement to the prosecutor probably tells a lot: "I and my brother Recep Tanrıverdi break off our ties on the order of President Erdoğan with the Tanriverdi Education Culture and Solidarity Foundation on January 6, 2014. We do not have any information about what the Foundation has been doing after this date."

Tanriverdi Education Culture and Solidarity Foundation continues to operate as a religious sect abandoned by its founders, it means.

Recep Tanriverdi was the name who benefited from the old tobacco warehouse in Beşiktaş in 2008. After the construction was completed, Shangri La Hotel, which was established in the old place of the warehouse, was inaugurated on May 11, 2013.

The opening which was a few weeks before the Gezi Resistance was described as follows:

The hotel was opened with Chinese traditional lion dance. Special thanks sent to the Shangri La chain.

DO NOT THINK IT IS INTENTIONAL, ERDOĞAN DID NOT THINK SO

A nationalist columnist Yılmaz Özdil criticized Erdoğan's blindness in the opening days of the hotel: Erdoğan is unaware what it means to open a hotel in front of the Prime Minister's Work Office where the 6th fleet's sailors were thrown into the sea.

We know that he was not aware when giving this rare corner of the Bosphorus to the Tanrıverdi family, who were not really loyal but active servants of the Fethullahist network!

In the end, today, an aircraft carrier is rising right next to the Prime Minister's Work Office.

The aircraft carrier whose sailors were thrown into the sea by the revolutionary young people of Turkey 51 years ago.

51 years after the real Prince of Darkness Cartridge watched with pain, the hotel of the highly talented guanxi, Mr. Kouk, is poking fun at the history.

The wheels of history are turning and turning.

It is turning by crashing the panzers, leopards, F-35s, patriots, Skorskis.

Shangri La is waiting for its turn.

[1] A journalist from Turkey, of liberal political line, that had many experiences in interviewing high-rank government officials, critical figures in Turkey’s politics (soL international)

Editor’s note: For any further contact or notes on this story, you can write the author: