Turkey's Pensioners Union (Tüm Emekli Sen) members announced that the 2021 budget will condemn retirees to starvation. Union members who came together in İzmir opened a banner saying 'There is a fire in the kitchen'. 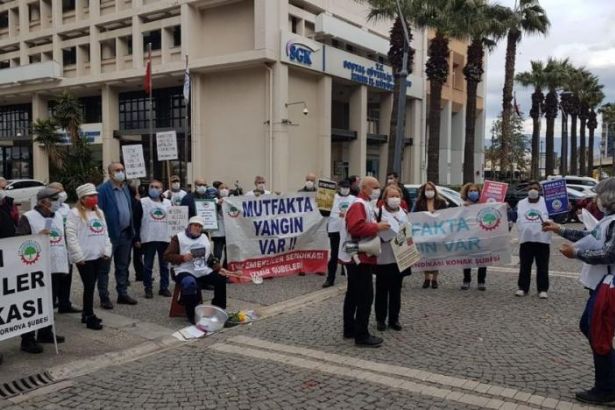 In the press release made by Turkey's Pensioners Union, the 2021 central government budget discussed in the Turkish Parliament and the attempts to keep away the retirees from union organizations were protested.

The retirees who came together in front of the Social Security Institution (SGK) Provincial Directorate in İzmir opened a banner saying “There is a fire in the kitchen”.

In the press release read here, it was emphasized that the resources in the budget were allocated to rent, interest, and armament, not to a humane life, and stated that this budget was "the budget for the condemnation of retirees to starvation".

In the statement, it was noted that retirees, who should be accepted as a disadvantaged group and should be given special support in the fight against the epidemic, are wanted to be closed to their homes under the name of precaution and almost abandoned to loneliness and deprivation, and the cases filed for the closure of retired unions were also requested to be withdrawn.

RETIREES SHOULD HAVE THE RIGHT TO UNIONIZE

In the statement made, the demands of the retirees were listed as follows:

- The closure cases against retirees' unions should be withdrawn, governorships should not be a party to these lawsuits.

- International conventions and the achievements that retirees have sustained by dealing with difficulties for 25 years and trade union organization should be recognized and constitutionally guaranteed.

- The wage imbalance among retirees should be eliminated as soon as possible, and the adjustment law regarding this should be removed before retirees are further victimized.

- Law initiatives brought under the name of omnibus law and aimed at reclaiming the rights we have acquired on retirement should be withdrawn.

- Monthly bonuses must be given 4 times a year.

HEALTH SERVICES SHOULD BE PUBLICLY GIVEN

- Health services should be made completely public and should be carried out by the public. Privatization should be abandoned.

- Health and treatment co-payments should not be collected from retirees.

- There should be no increase in basic necessities such as bread, meat, water, electricity, and natural gas.

- It is clear that the epidemic will not pass immediately and will leave deep effects. Accordingly, at least a two-year struggle / coping program against the epidemic should be prepared and implemented. The basic approach of this program should be the understanding that health services are public services.

- After the medical approval of vaccines against coronavirus, vaccination should be free of charge (starting with healthcare workers and those over 65 and those with chronic diseases).

- Practices that have been implemented under the name of precaution against the epidemic and aimed at secluding us should be abandoned as soon as possible.

- In epidemic conditions, the elderly and those with chronic diseases should be supported by the local or central government, and their needs should be met free of charge.