Hundreds of refugees and migrants are trying to reach Europe via Turkish land borders and coastal areas after Turkey says it will no longer prevent refugees from reaching Europe. 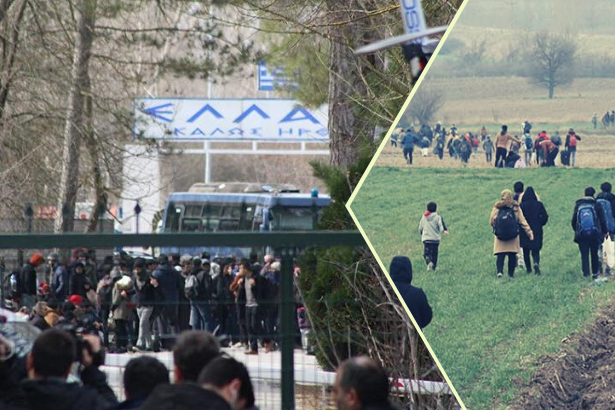 After a series of airstrikes on late Thursday killed at least 33 Turkish soldiers and wounded 36 in Syria’s Idlib, a senior Turkish official told Reuters that Turkey will no longer stop Syrian refugees from reaching Europe by land or sea.

Hundreds of refugees have rushed into Turkey’s northwestern province of Edirne which is located along the European Union countries Bulgaria and Greece following the statements of Turkish authorities in the wake of the deadly airstrikes.

Some refugees came to the city by taxis from İstanbul as some others were transferred by buses to reach Kapıkule border gate after the airstrikes that killed Turkish troops in Syria.

Meanwhile, Ömer Çelik, the spokesman of the ruling party AKP, talked after the airstrikes in Syria. “Our policy of refugees is still the same but we cannot keep them anymore. Turkey’s capacity for refugees is full. After the strikes, a movement of refugees to Europe has started.”

Meanwhile, a group of refugees, nearly 30, has been observed in Greece’s island of Lesvos in the northeastern Aegean Sea. Early today a group moved by a boat from Turkey’s coastal district of Ayvacık in the province of Çanakkale. The boat could reach Lesvos despite Greek coastal security forces’ warning to stop.

Turkey hosts approximately 3.7 million Syrian refugees, while the European Union has provided billions of euros for “humanitarian aid” in return for the Turkish government agreeing to stop the influx of migrants into Europe under a deal signed in 2016.