Last week, HDP delegation headed by HDP Co-Chair Sezai Temelli met with TÜSİAD delegation headed by TÜSİAD Chairman Simone Kaslowski at TÜSİAD headquarters to discuss judicial reform, trustees appointed by the government instead of the elected HDP mayors in three cities, and a possible alliance for democracy. SoL columnist and TKP CC member Alpaslan Savaş writes on what this visit means, considering the perception of "democracy" of capitalists 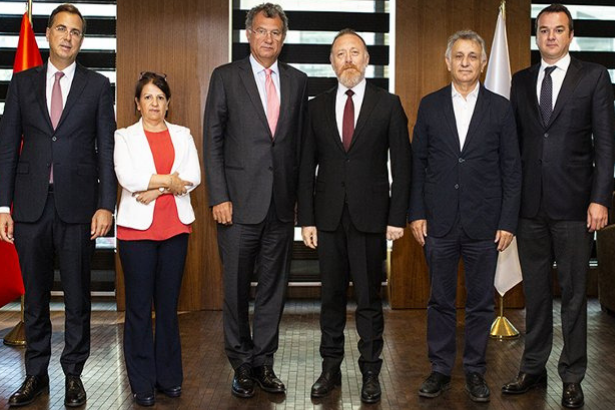 The HDP delegation visited Turkey's biggest capitalist organization TÜSİAD earlier this week. According to their statement, the appointed trustees, democratic constitution and judicial reform, as well as a democracy alliance, were the issues that were discussed.

Let me ignore those liberals commenting “TÜSİAD is breaking down the wall of fear” about the visit. The real issue is that the bosses in Turkey have managed to become one of the main pillars of both the ruling AKP and fascist MHP coalition and the 'democracy coalition' of the main opposition CHP, pro-Kurdish HDP, fascist İYİP, and Islamist SP, with their some parts leaning towards left.

Winning with AKP and winning with the anti-AKP front… “Win-win" is a strategy of capitalists.

But we should look at what bosses understand from 'democracy' and what kind of a relationship they have had with it.

THEY HAVE LIVED OFF THE BACKS OF WORKERS

They supported and led the junta. They closed down the trade unions. Then, one night, they have registered the workers to yellow unions under their control. They sacked those who resigned. They cleaned up all the progressive-pioneer workers in the factories and replaced them with fascist and Islamist workers. Thanks to their experts in the state, they signed the most severe regulations regarding working life and made them permanent.

All this can be read as a small summary of the “class” performance of the bosses after the military coup of 1980.

After much progress in this bullying, they needed a new ideology. A new ideology and a concept that would feed that ideology...

INDUSTRIAL DEMOCRACY OF THE CAPITALISTS

The product of this quest has been the concept of "industrial democracy". This concept raised by Turkish bourgeoisie was the product of the concern for creating a "normalization" feeling.

After that came the dissolution of socialism in the Soviet Union. The fact that this “bad example" which was progress for the workers, disappeared made things easier. It was a shot in the arm for bosses.

They stepped on the gas stronger.

The very first demagoguery was “the working class has changed”. There were no workers but operators, no foremen but team leader, no overseers but supervisors.

Then it was followed by "no classes left!" The division of societies into classes was the mind of the Cold War times and was now behind.

But the workplaces still existed and were very important. Continuity was essential. If there was a workplace, there was work; if there was work, there were employees. It was essential to protect the workplace, watch over, make sacrifices for it. And now a new, modern relationship was developed that considers values such as reconciliation, open door, and participation, not the old-style worker-employer relationship based on the labor-capital contradiction.

This nonsense was called “industrial democracy".

They opened mosques in industrial sites and factories. Industrial democracy was the worker's freedom to worship here. The "thankful worker" created by this democracy served bosses the most.

In industrial democracy, the freedom of workers to organize was to become a member of the trade union of the capitalist. If the workers say “no, we don't want to”, they found themselves in front of the door.

They destroyed the walls in the workplaces. In industrial democracy, the doors of the general managers were always open, but it was not possible to enter through that door and make a collective demand from the boss.

Industrial democracy gave the worker the right to make suggestions. But because his proposal increased productivity it became possible for the boss to work with fewer workers. Now when the workers attempted to protect their dismissed friends, they would live the same end.

In industrial democracy where everything is free for workers, it is forbidden to be in solidarity with colleagues, to organize, to negotiate wages, to demand improvements in working conditions, and to use the power from production for all.

That was the bosses' understanding of democracy. Fully class-based!

THEY ALSO HAVE “PEACE”

Later, they developed and diversified this understanding. What they are talking about now is mostly "industrial peace".

Are the workers organized? Are strikes frequent? Are labor movements such as strike and resistance intense? Is it difficult for governments to settle everything in worker-employer disputes? According to the bosses, the geographies where they get "no" as the answer to these questions fall within the scope of "industrial peace", that is investable environments. That there is sharia in the country, the junta is ruling, human rights, justice do not matter much. The criterion is “industrial peace”.

The unbearable lightness of seeking democracy and peace in front of the capitalists' doors remains.