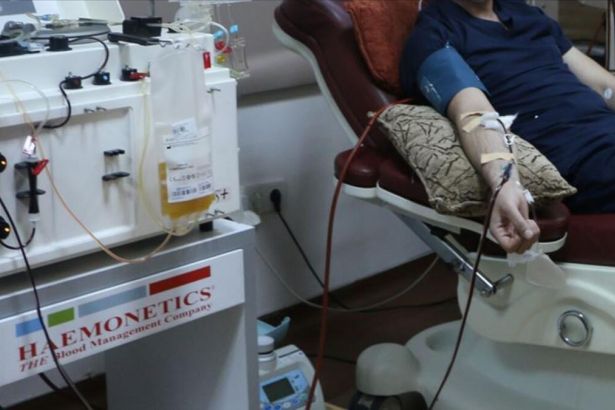 Covid-19 has turned into a super dividend for private hospitals. While the state covers the treatment fees of the patients, private hospitals converted immune plasma therapy into a new advantageous income prospect.

The Ministry of Health explains the treatment as “the treatment method that is carried out on critically ill patients by using blood plasma collected by Turkish Red Crescent from patients diagnosed with COVID-19 but who recovered after the treatment process”.

The Ministry of Health states that the plasma donation can be collected from 18-60 years old men and women, preferably women who were not pregnant, and who have not received blood transfusions before. According to the Ministry, the treatment is completely free and would be covered by the state.

Despite this statement by the ministry, private hospitals provide the treatment for a fee. A citizen caught in the epidemic in Istanbul was treated at Acıbadem hospital and discharged after his treatment.

After recovery, the hospital contacted him and asked to donate his plasma. He wanted to know whether the plasma treatment to be applied to a new patient would be free or not. To his surprise, he learned that it was a charged treatment for a minimum of 5 thousand TRY because the insurance did not cover it.

According to the information soL News got from a branch of the hospital in Istanbul, a net fee has not been determined for the plasma treatment yet. The hospital official stated that there may be a fee of 5 to 10 thousand TRY and the price may even exceed 10 thousand TRY.

PLASMA IS SOLD FOR MONEY

The social media and various communication groups had previously brought up the news that plasma received from recovered COVID-19 patients was purchased like a commercial commodity, and the Red Crescent President confirmed the incident by making a statement on the subject.

Kerem Kınık, President of the Turkish Red Crescent, said in his statement on the thread: “Red Crescent has already started communicating directly with all our citizens who could become donors. No private hospital or relatives of COVID-19 patients should call for plasma donations with the promise of money or reward. This is not ethical and besides, it is also sanctioned. Our citizens should not attempt in such things. ”

THEY DO THIS ALL THE TIME

Private hospitals charge their patients in violation of the legislation not only for plasma treatment during the epidemic days but also for blood transfusions. While many private hospitals carry out these transactions for a certain fee, these transactions are not reflected on the "invoices" as they do not comply with legal regulations. An anonymous source of information involved in blood donation procedures said that private hospitals constantly violated the legislation on this issue. He said to soL News that these private hospitals even added blood transfusion costs to other procedures wangling their way through without reflecting it on invoices. Stating that plasma treatment is not different from blood treatment, the anonymous staff emphasized that the reason for this kind of misconduct is the lack of supervision and job flow control.