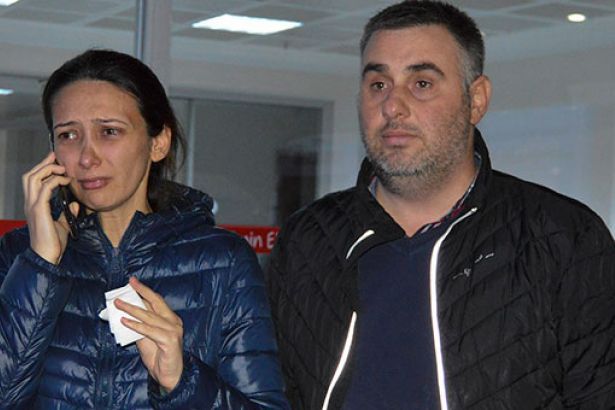 Ebru Tireli, a 4-month pregnant woman with a child in Turgutlu county of the city of Manisa, was attacked by an unknown attacker. She was exercising in a park when she was attacked.

Having got off a red car, and taking his shoe off, the attacker started to hit Tireli in the face, while shouting, “You will not walk or exercise here again!” The woman then fell to the ground, and hit her head onto the curb, yet the attacker continued to kick and hit her with his shoe.

Tireli stated: “I shouted out that I was pregnant, begging him to stop hitting, but he did not stop. He continued to beat me furiously. I fell down, I hit my head onto the curb, and he climbed on me and started hitting me in the face. He was cursing and hitting, and then he suddenly left me and ran away.”

She remarked that she had thought to have lost her baby, and once she had composed herself she had called her husband, and they had gone to the hospital to find out that the baby was alright. Her most remarkable words, however, indicates the impact of religious obscurantism on the society: “I was wearing a hooded coat. The coat covered every millimeter of my body. It was even impossible to tell if I was a man or a woman at first sight.”

Her husband, Akın Tireli, stated that he could have lost both his unborn child and wife because of an attacker, maintaining that they would seek justice to the end.

Such an attack, on the other hand, reminds people of an obscurantist who was invited to speak on the state TV (TRT) back in 2013. Ömer Tuğrul İnançer, a religious obscurantist and a supporter of AKP, stated that it was “blatant” for a pregnant woman to go out and walk on the streets on their own.

The attack, however, receives reaction from several circles. The Movement of Enlightenment Against Reaction released a declaration on the incident:

This is an attack against humanity, and it is unforgivable!

Attacking a pregnant woman is a crime against humanity.

Attacking women and little girls, child marriage, and sexual abuse and assault… these are all crimes against humanity, and unforgivable.

In the AKP regime, the cases of sexual abuse and assault, not differentiating between male and female, have radically increased, causing the obscurantist mentality to thrive in the country.

Our young girls and boys have been subjected to violence, harassment, insult, and pressure in the dormitories of the zealot, and they have even been burned to death!

This will not go on like this. We will prevent those attacks, and found a country where women are equal and free citizens.

We condemn this attack, and inform the public that the attacker will not be able to get away with this.