Citizens protested police officers who attempted to remove the solidarity tents that were set up following the major earthquake in Turkey's İzmir. Communist Party of Turkey has set up solidarity tents since the first day of the quake. 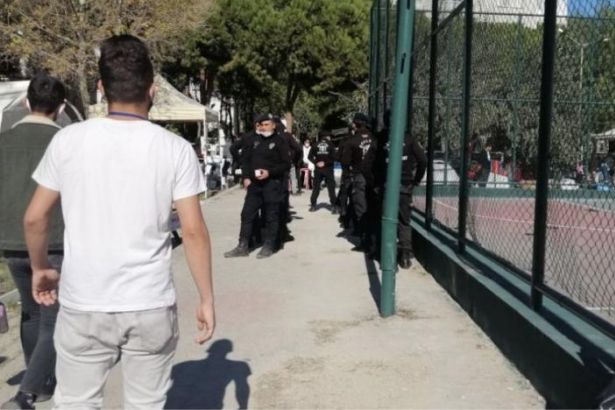 Following the earthquake in Turkey's western province of İzmir, the security forces attempted to remove the solidarity tents that were set up for the people. Stating that they did not receive sufficient support from the Disaster and Emergency Management Presidency (AFAD) and other organizations, many citizens reacted to the removal attempt of the solidarity tents while religious sects were allowed to act freely in the quake-hit area.

"They want to leave the aids to religious sects"

The police came to the tents and wanted to prevent a citizen who donated some aids for the Communist Party of Turkey (TKP) to distribute to the victims of the quake. However, the aids were delivered despite the police attempt. "They want to give the aids to religious sects, yet we will continue to distribute aids,” TKP members responded the police.

Cemile Uğur, who stays in a tent with her family, said that she supported her family from the very first moment through the solidarity tents, adding that she was worried about how her needs would be met from now on. "We received the first aid from you," Uğur said, adding that she did not know what to do and reacted to the decision. Similarly, some other citizens staying in tents reacted to this situation.

"TKP will continue to stand in solidarity with earthquake victims"

"We were in the affected areas of Bayraklı district in Izmir since the first day of the earthquake. We have seen that neither the government nor the local administrations have an organization that can meet the basic needs of the earthquake victims. If these huge corporations had done their work, there would be no need for TKP. But at this point, one week has passed since the earthquake, people are still trying to stay and warm up in inhumane conditions and they don't know what will happen tomorrow. In this case, the Communist Party of Turkey (TKP) is needed, TKP will continue to stand in solidarity with the earthquake victims. We are in direct contact with hundreds of earthquake victims; those who think that they will get rid of TKP by removing the desk for solidarity are deceiving themselves."

While the attempt to remove the solidarity tent of the TKP continues, Police attacks were also carried out against the tent of Halkevleri. 7 people were detained in the attack.

Police attacked the tents of Halkevleri, a left-leaning political organization, and 7 were detained in addition to the police attempt to remove the solidarity tents of TKP in the quake-hit area.