People of this country will never let darkness go through: TKP

After the recent reactionary attack on its members, the Communist Party of Turkey made a statement, calling for a struggle to achieve an independent, free, sovereign, secular and non-exploitative Turkey. 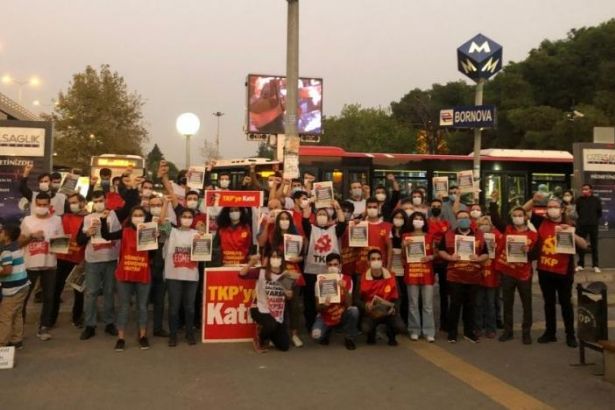 The members of the Communist Party of Turkey in Izmir were attacked while they were delivering weekly Boyun Eğme at one of the main metro stations in the city, Bornova metro station. Three party members were injured. After the incident, TKP made the following statement:

“Our members, who were delivering TKP's weekly Boyun Eğme to the public at Izmir Bornova metro station, attacked by the reactionaries. Three party members were injured during the attack by reactionaries who were saying that ‘not all the Islamic sects are bad’ for the people.

A similar attack took place in Istanbul recently, and TKP members reciprocated by keeping on delivering weekly Boyun Eğme to the people. The identity of the attackers was evident in Istanbul, as well as in Izmir.

The target of reactionaries is not TKP members alone. Reactionism is not just a threat to the politics of TKP and our members; our country is threatened. Turkey is threatened!

They are at odds with the republic, secularism, science, art, and women; because they cannot stand living in an enlightened country. Because ‘a dark country’ means people who do not think, do not stand behind labor; it means that the minority will fill their pockets even more.

But not the darkness; enlightenment will win. Let's put it again; there is not ‘a better religious sect’ for the people. The politicians who discuss the presence of Islamic sects over good and evil in Turkey, strengthen this exploitative system.

The people of this country will never let the darkness go through. The Communist Party of the country will continue her struggle for equality and freedom.

We continue to call for a struggle to achieve an independent, free, sovereign, secular and non-exploitative Turkey, Let's increase the number of TKP volunteers and change this social order together.”