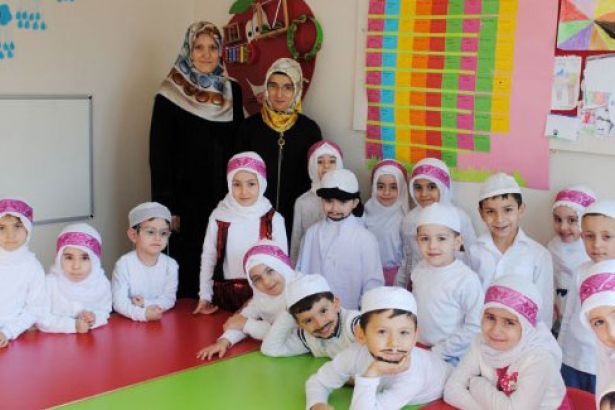 16,370 children between 0-4 years old enrolled on Quran courses in Turkey in 2018, according to the "2018 Evaluation Report for Quran Courses held in Summer" prepared by the Directorate of Religious Affairs (Diyanet).

Revealing that Turkey’s Religious Affairs does not trust its own Islamic courses, the report suggests that "the domination of religious associations, charities and congregations must be eliminated in the Quran courses."

Kadir Dinç, The General Directorate of Training Services, stated in the report that "Our target group was approximately 17 million children who currently continue their formal education, but the results did not reach even 3 million. This situation clearly shows that we need to make more efforts and work harder."

According to the report, 2 million 671 thousand 294 children in total attended the Quran courses organized by the Religious Affairs providing training between June 25 and August 17, 2018. 1 million 354 thousand 909 of these children were male, while 1 million 316 thousand 385 of them were female children.

The report prepared by the Religious Affairs also shows that instructors are pedagogically inadequate, and there is no high-quality education in the Quran courses since the social facilities are quite insufficient.

Underlining that the number of students between 5-14 years old has decreased compared to the previous year (2017), the report states: "The courses opened by the public education centers and vacation schools launched by municipalities or some private schools have an impact upon this fall."

"In addition, one of the reasons behind the decreasing of the number of students between 5-14 years old enrolling in the Quran courses is that the students can already take Quran courses, ‘the Life of the Prophet Muhammad’, and ‘the Basic Religious Knowledge’ as elective courses in their schools", the Religious Affairs authorities argued in the report.

In 2017, Turkey’s Religious Affairs had launched a new project with the slogan of "Quran courses service for every age group for every day" by opening more Quran classes to provide Sunni Islamic impositions for all students from every level and for all segments of society in a timely manner.

"We should work more than ever to convey the eternal call of Allah and his prophet… to the humanity which struggles desperately in the claws of secularism and denies all values,” Ali Erbaş, the President of Religious Affairs (Diyanet) had said in his first message as the country’s top imam when he took the office in 2017.

Religious Affairs has played a significant role in the Islamic transformation of the country under the ruling Justice and Development Party (AKP).

The Turkish government allocates huge budgets to the Presidency of Religious Affairs every year, while the office has led to numerous scandalous incidents in undermining secularism and designating social life in accordance with Islamic principles.

In 2019, the budget allocated to the Presidency of Religious Affairs has been boosted to 10.5 billion TL [$1.743,29] with an increase of 34% while Turkey’s other ministries on average received a budget boost of 16% for the same year.