“The military presence of Turkey firstly reminds that the axes of Kurdish-American and Russia-Syria have shaken. The strategy of AKP towards the US and Russia was defined with the term of “subservience”; in other words, Turkey was trying to persuade the big powers of the fact that Turkey is a better partner than the Kurds and Assad!” 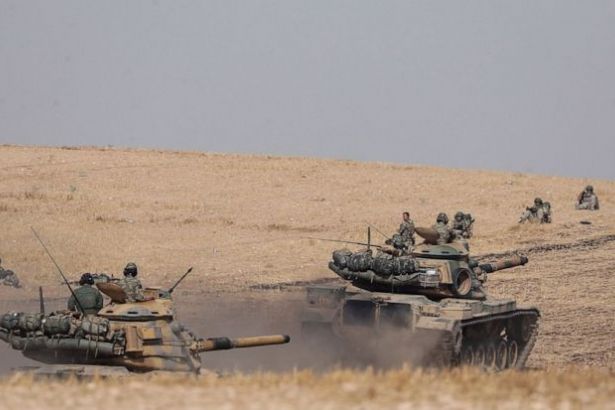 In hindsight, we can see that a preparation phase went on as international political conditions became proper for Turkey to launch a war. We can understand that the conditions at home have been highly proper if we look at the performance of the pro-establishment opposition throughout the military authorization and operation.

It is clear that the US and Russia gave the green light to the cross-border operation of the Turkish Armed Forces and the Free Syrian Army. There is at least a trilateral agreement including Turkey. It is apparent that the European Union, which has already become unimportant within the equation, and Iran, which has always been important to some degree, have remained behind in the process.

The military presence of Turkey firstly reminds us that the axes of Kurdish-American and Russia-Syria have shaken. The strategy of AKP towards the US and Russia was defined with the term of “subservience”; in other words, Turkey was trying to persuade the big powers of the fact that Turkey is a better partner than the Kurds and Assad! Thinking that he eventually achieved this attempt, Erdoğan has been partially mistaken but he has reached some gains that are proper for him to market his supposition among the public opinion.

Let us be clear… Putting aside Trump’s nonsense statements, the US has not given up the Kurdish factor considering that this factor is as good as AKP in subservience. One can look at the statements of Kobani, who has rapidly become popular as the “general commander” of the Syrian Democratic Forces. As Trump has humiliated the Kurds by saying “whoever they chose to help can protect the Kurds”, the “commander” merely begs for staying friends.

Taking a closer look at the American sources, it seems that they decided to bring the PYD-YPG into line. As the case is nationalism, we can indicate to the disproportion considering that the Kurdish administration is ruling almost one-third of the country although the Kurds are made up of 8 percent at the utmost of Syria’s population. This angle will now be narrowed. This narrowing does not necessarily mean that the partnership has come to an end.

Moreover and more importantly, there is a fact of Barzani in the Kurdish world and the partnership with the US. Barzani also violated the borders of “realism” in recent times and attempted to an independence referendum… This is a game of balance. Now, Barzani’s influence will increase against the others.

It is not a fake story of AKP that the Kurdish movements have been interested in forming a corridor up to the Mediterranean. Some Kurdish representatives said in the past that the “peace process” in Turkey and the Syrian civil war would evolve into “a Kurdish entity including Latakia”. Other representatives claimed that Ankara’s main goal was to prevent a Kurdish corridor up to the Mediterranean.

That’s not wrong. Now, AKP has attempted to form a corridor as the secure zone not through Latakia but Hatay. Recent developments have revealed that the consequence would not be different and that the absolute strategic influence would not be left to Turkey.

The synthesis that also reflects the balance between the big powers is that the regional rule will be fragmental. As the PYD has been toppled from its temporary throne, its legacy is being distributed. The release of IS cadres shows that they will also be among the parts.

Meanwhile, although Trump himself is an issue of psychiatry, a strategic mind definitely exists in the developments. The US imperialism tends to lock the center of the old world and leave it to a deadlock in order to deal with rising China.

As for the axis of Syria-Russia, the fact that Damascus has gained the upper hand for the last two days should not cover-up that the conditions here also shattered. Almost a year ago, the successes of the Syrian people, army and leadership fostered the possibility of reviving the old Syria. We have become highly distanced from this hope. As the presence of Russia is important to rescue Damascus, today’s imperialist competition does not envisage a territorially integrated Syria, and Russia is one of the elements of this fragmental situation.

All these could not take place without tension between Damascus and Moscow. The axis is still standing but Russia did not feel to say in vain -taking the words out of Assad’s mouth- “we’ll leave if we’re not welcomed”. It is clear that Russia is there for its own interests as nobody wants it to go away.

AKP often declares “decisive moments”. Their discourse of survival was like that. The Syrian war was yet another one. In the end, what they say does not come true. The big turning point never comes. Turkey does not come under the domination of sharia when AKP wins the elections. Nor Erdoğan becomes a sultan or a caliph. And today, there will be no “records” like taking over the energy routes, building houses for one million people, turning out the demographic structure to eliminate the Kurds along the border.

However, AKP will get a certain amount of energy through this war. Or, more precisely, it will prove everyone the lack of energy of the broad political opposition against it… Although AKP might withdraw from the Syrian campaign, it would not be wrong even if it smirks at imperialists and capitalists by saying “you already have seen those you preferred to me”.

We have been saying for years that it is impossible for AKP to lead Turkey into its desired projection. More precisely, the pro-establishment opposition could not remediate any problem.