Mineworkers marching from Soma to Ankara for unpaid severance pays

Soma mineworkers who have been taking actions during the summer for severance payments that have not been paid for five years started to march to Ankara. The gendarmerie in the Kırkağaç district stopped the workers and the workers started a sit-in 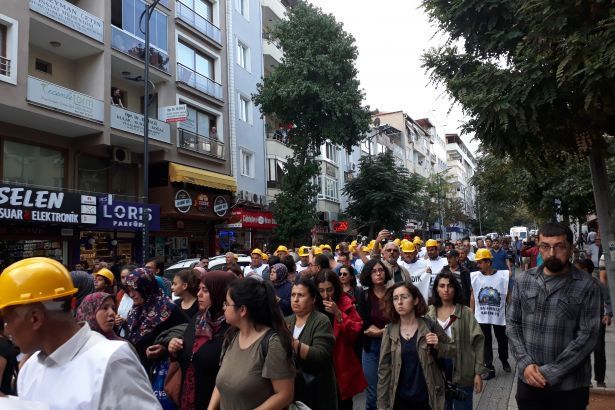 Soma mine workers, who have continued their protests for their unpaid severance payments, started to march to Ankara yesterday.

After the massacres in Uyar Mining and Soma Coal, the workers who were unemployed, have not been able to receive severance payments for 5 years despite the court decisions in favor of the workers.

After Soma Holding was transferred to Turkey's saving deposit insurance fund, mineworkers could not find any addressees to demand their severance payments. In the summer, the workers tried to get an answer from Turkish Coal Enterprises along (TKI), but their attempts failed.

After 60 miners gathered in front of the district governor's office, they started their marches from Soma under the leadership of the Independent Mine Workers Union. The first stop of the workers was the cemetery opened after 301 mineworkers were killed in 2014.

Speaking to soL news, the chairman of the union, Tahir Çetin said: "First we will stop to visit our friends, then we will walk to Bakır and get on the buses. We will walk one kilometer for each of our friends killed in the massacre. The government is a pro-capitalist one, they may want to stop us. We expect solidarity and support from the working class and the working people of the region."

Miners were stopped by the gendarmerie in the district of Kırkağaç and they started a sit-in.

On May 13, 2014, more than 700 miners had been trapped in one of the pits of the Soma mine, which had been a private lignite mine in the country's western province of Manisa. More than 160 other people came out of the mine with injuries while 301 workers were killed brutally.