Message of support from KKE to Turkey's communist candidates: This social order must change! 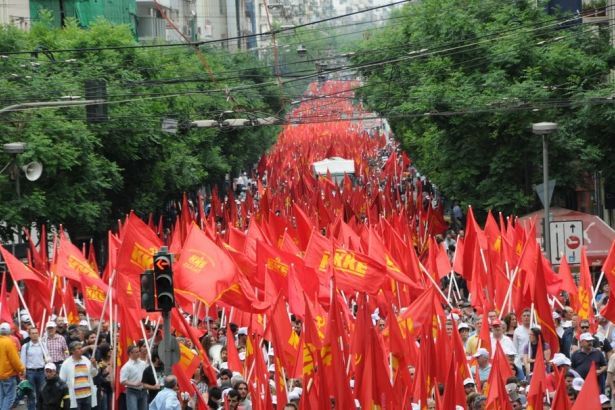 Communist Party of Greece (KKE) on Sunday expresses its support for Turkey's 'This Social Order Must Change Platform' and the platform's communist candidates. The message comes in the run-up to legislative elections on June 24.

The KKE Secretary-General, Dimitris Kutsumbas have read the support letter to 17 candidates of This Social Order Must Change Platform.

"The Greek workers are on the Turkish working people, with the struggles of our peoples we can create a region without monopolies, without exploitation, without racism and wars," Kutsumbas said in a video message.

Based on additional conditions that are not written in the law, the Turkey's electoral board concluded that the Communist Party of Turkey (TKP), which has already satisfied all conditions that political parties are required to fulfill in order to participate in elections, will not be allowed to take part in the general elections to be held on June 24, 2018.

Following the board's unlawful decision, the TKP has decided to represent the working people with independent communist candidates at the upcoming parliamentary election. This Social Order Must Change Platform was established following the call of the TKP.

"The Communist Party of Greece expresses its international solidarity with the Communist Party of Turkey, supports its electoral campaign This Social Order Must Change and its independent candidates. The exploitation of labour from capital, the attack on labour-popular rights, poverty, unemployment, refugees, wars show that there is no ‘good’ capitalism, this is confirmed by our experience in Greece and the anti-popular SYRIZA government," Kutsumbas says in the video message.