Kemal Okuyan writes: 'You cannot flee to Germany or Netherlands'

First Secretary of the Communist Party of Turkey: "it should be noted that neither our rage against the arrogant European imperialism nor the shame we feel towards the current situation of our country lead us to take any action in favour of the farce of the 'national issue' of the AKP government. Contrarily, our rage is sharpening against this anti-people system and its representatives 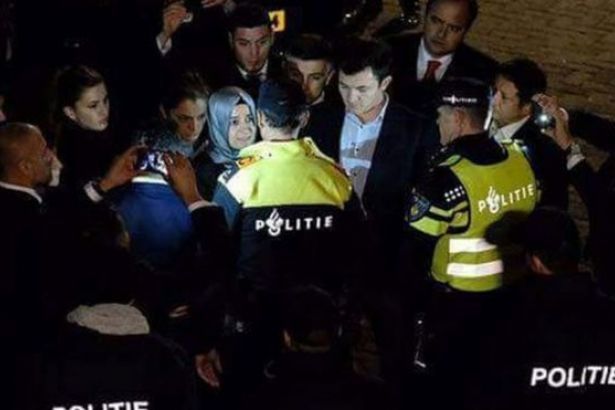 Minister Fatma Betül Sayan was denied entrance to the Turkish consulate in Rotterdam, with Dutch police blocking her car and the authorities ordering her deportation.
  

First Secretary of the CC of Communist Party of Turkey (TKP), soL columnist, Kemal Okuyan wrote an article on March 13, 2017, on the stance of the communists in Turkey regarding the recent crisis between the governments of Turkey and the Netherlands and other EU countries.

You cannot flee to Germany or the Netherlands

Foreign Minister Çavuşoğlu asked the Dutch Prime Minister, “What kind of tulip are you?” [FM Çavuşoğlu implies a slang word in Turkish] Such a question could be replied only with one answer, summarising the situation Turkey has fallen in: I can beat you with my vulgar character.

True, the situation of our country hurts us. Eventually, Erdoğan and his AKP [the Justice and Development Party] are playing on a tension with Austria, Germany, the Netherlands and Denmark. These are the core states of the imperialist Europe, and Turkey is acting in such a way that it may almost “justify” these arrogant capitalist states which imposed many agonies on humanity in economic, military and cultural terms.

True, countries and people are out of question at this point; what matters here are Turkey on the one hand, and the political powers serving the interests of the bourgeoisie on the other hand, which can never be “fair”. How, when and why could Germany be “just” as a powerful imperialist country? Has not the Netherlands ever been oppressive and exploitative with its influential monopolies in the wake of its infamous colonialist history?

Across the way, there is no Turkey, but a reactionary and pro-market ruling power that has encompassed Turkey. No one can show sympathy and solidarity towards such a power, nor support it!

We cannot hold the scales of justice to choose a side amid the current crisis. Nevertheless, we should deal with the crisis from the view of our struggle against the political power in our country as our primary responsibility. Doubtlessly, this task cannot be separated from the struggle against powerful imperialist countries and organisations; yet we know that the critical chain of the increasingly escalating tension is the fact that a political power that has largely lost its legitimacy in Turkey is continuously making uncontrolled moves in an effort to save itself. These moves must be defeated in the name of the working people of Turkey and Europe (including Turkey-origin migrant workers).

First of all, let’s take a closer look at what AKP is carrying out nowadays:

AKP is threatening our people with civil war, giving the impression of preparing for a civil war.

Lawlessness has been declared in the country. For example, AKP seized a hospital building in İzmir during the state of emergency and turned it into a party building.

The ruling power that cannot create a tension at its disposal at home kicks up a row abroad all the time. The Greek government is no innocent, yet obviously, does AKP intent to mess with. The same goes for Germany, the Netherlands and the others.

All these are a whole package, such moves by Erdoğan and AKP in order to save the day. We cannot adopt different attitudes towards each of these moves. For instance, the supportive statements by Kılıçdaroğlu [the leader of the main opposition Republican People’s Party-CHP] to AKP in foreign policy do not only imply a misery but also prove that CHP does not suggest an alternative to AKP.

However, AKP’s existing foreign policy should be considered as extremely risky and dangerous initiatives of a political power that has bankrupted and lost its legitimacy.

AKP’s right to propaganda in other countries cannot be evaluated as a question of general freedom. The party in question represents a reactionary, tyrant and anti-labour mindset.

Furthermore, showing tolerance towards the tension that AKP is trying to escalate would stand for helping the already traumatised Turkish society be paralysed completely with fake and rotten nationalism while leading racism to rise in Europe and further inactivating the working class movement in all crisis-hit countries. Moreover, it is no good news that the European Union obtains an opportunity to cover up its own reactionary stance and desperate situation, thus wash its dirty hands thanks to a reactionary and ill-bred [Turkish] government.

It seems possible that AKP may lose this gambling. Some of the people living in Germany, the Netherlands and other EU countries, who have voted for AKP so far may be saying now, “The more our guys go crazy, the more we are suffering.” Apart from economic interests, “security” concerns also emerge at this point. In other words, tension may not be beneficial for AKP all the time. It is apparent that the people in Turkey would not respond the tension with Germany with similar reactions as they did have towards Syria, Greece or Armenia. Not that much!

I suppose it has been understood that the matter is not only up to the referendum. Without knowing what to do on the evening of April 16, such a front of ‘NO’ will not be able to muddle through this havoc without reaching a horizon beyond April 17 and afterwards.

To sum up: the current system of exploitation cannot produce something beyond AKP while the latter drags the country into uncertainty. Falling itself into the arms of “external enemy”, it intends to puzzle, confuse and intimidate its opponents at home.

We have nothing to do with the account of the US, Germany or any other country that created AKP. We have an account to settle with all of them. However, the attempts of these powers to terminate AKP concern us since this will be no good at all for our country. We have always said, “We cannot let you finish AKP, that is the task of the working people of Turkey.”

Indeed, AKP takes shelter in Germany and the Netherlands so as to flee from the people. The imperialists that supported and carried AKP to the power yesterday is stealing the role of our people whilst “fighting” it today. Yet it should be noted that neither our rage against the arrogant European imperialism nor the shame we feel towards the current situation of our country lead us to take any action in favour of the farce of the “national issue” of the AKP government. Contrarily, our rage is sharpening against this anti-people system and its representatives.