Kemal Okuyan writes: 'Everybody should stick to their own guns'

"There can be no legitimacy for kleptocracy, plundering, inequality, exploitation, warmongering, ignorance, and hostility towards science and art. These are what we should question and reject vis-à-vis the presidential decor" 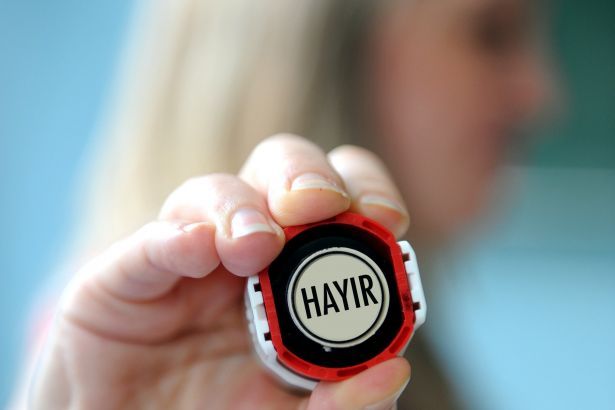 First Secretary of the CC of Communist Party of Turkey (TKP), soL columnist, Kemal Okuyan wrote an article on February 20, 2017, on the stance of the communists in Turkey regarding the upcoming referendum for constitutional amendments.

Everybody should stick to their own guns…

We are facing a well-known front on the road to the referendum: the front of "yes." I have no idea about the covert aspect of the cooperation between [President] Erdoğan and Bahçeli [the Nationalist Movement Party’s leader who supports Erdoğan’s presidential system]; some mention blackmailing and some others talk about awarding. There is, however, politically and ideologically close links between them and between the social groups they represent. Furthermore, we can say that the "yes" votes are merged within the devotion to the Ottoman past, i.e. anti-Republicanism…

Unquestionably, a straightforwardly reactionary front emerges from this point.

As far as those who say "no" are concerned, we cannot speak of such coalescence at all. What brings together the sections that do not accept the proposed constitutional amendments may at best be the rage against Erdoğan; however, it is known that there are some elements at the "no" side, which are so angry at each other that they can easily forget their common rage against Erdoğan.

Nevertheless, they will go to the ballot box to say "no" and wait for the polls results with the same motives.

Nothing surprising here; did not the same thing happen during the Brexit referendum process in the United Kingdom? Of all those who were in favour of “leaving”, racist/nationalist centres were also available, which adopted the same attitude as that of Leftist elements that were against the membership to the European Union on behalf of the working people.

They did so, yet no cooperation existed at all. They just made the same choice with different motives at a two-alternative crossroad.

The same will take place during the referendum on April 16. Apples, oranges and pears will be gathered at the "no" side.

This is neither wrong nor surprising.

What is wrong is to try to own the "no" votes, or to furnish them with an unprincipled characteristic.

So, some say [political] parties should not carry out activities. Some say if the leftists took to the streets, they would lead to a boomerang effect since the further confrontation with Erdoğan would stimulate those who are fond of Erdoğan to tend to the ‘yes’ side. They say thus we should not call the ruling party AKP but AK Party as Erdoğan wishes to call his party. Furthermore, they say, we should act gently, and not propagandise the "no" choice directly… So much so that some claim the "no" votes will rescue Erdoğan himself, too.

Therefore, we are expected to endeavour to raise the number of "no" votes albeit such a mindset.

Yet everybody should stick to their own guns!

No one should dare to raise their voice and say, “It would be needless to divide the ‘no’ front”. Something non-existent cannot be divided. When a harsh and bloody settlement came to the fore within the coalition of AKP on July 15 [the failed coup attempt by the Gülenist faction, the former ally of Erdoğan and his party], we were not those who invented the spirit of Yenikapı to help Erdoğan instead of taking an honourable road against the pro-American reactionary Gülenist movement [Okuyan refers to the post-coup attempt mass rally of President Erdoğan with the support of the “opposition” parties such as the Republican People’s Party (CHP) and the Nationalist Movement Party (MHP)]. Moreover, we were not those who had flirted with this movement and had relied on so-called deep strategies previously.

We will not feel embarrassed or ashamed during the referendum while saying our own ‘NO’ with a strong voice. We will not only say ‘no’ but also explain why we say so. We will never feel humiliated for our own justifications. We will largely need these justifications when the referendum results in favour of ‘no’ on the evening of April 16. The primary struggle will start at that time. It will not be the end of the world if the ‘yes’ side wins, but the struggle will get sharpened.

We say everybody should stick to their own guns.

What will be put to the vote on April 16 is not a one-man regime. True, one-man regime should be rejected since it is primitive. But what about all those already existing misdeeds, tyranny, inequality and injustice which are not based on the one-man regime?

What will be put to the vote on April 16 are the AKP and its chief Erdoğan who have fallen apart. That is true, after the constitutional amendments, Erdoğan’s personal authority will meddle with everything around the country.

Yet a question raises here: will the same practices be legitimate if they are undersigned by some five persons or supported by the parliament?

This country has reached this situation since this question has been answered “yes” for many years.

There can be no legitimacy for kleptocracy, plundering, inequality, exploitation, warmongering, ignorance, and hostility towards science and art.

These are what we should question and reject vis-à-vis the presidential decor.

Those who say, “Ignore such things, let’s just get through the referendum”, are assisting AKP one more time. People are hungry, people are unhappy, people are anxious. A part of the AKP’s electoral base is questioning Erdoğan and his party due to economic challenges. Another part has started to think that religionization has passed the limits.

However, a great problem is that questioning and disaffection are observed within the AKP’s base while non-AKP voters are increasingly overwhelmed by the sense of desperation and the lack of an alternative. Tolerate privatisations, obligatory religion lessons, the ban on strikes, but object to one-man regime!

That does not sound convincing either.