Istanbul's top two mayoral candidates İmamoğlu and Yıldırım, from the main opposition CHP and ruling AKP, came together for a joint live TV debate, first in 17 years, on Sunday ahead of the Istanbul rerun 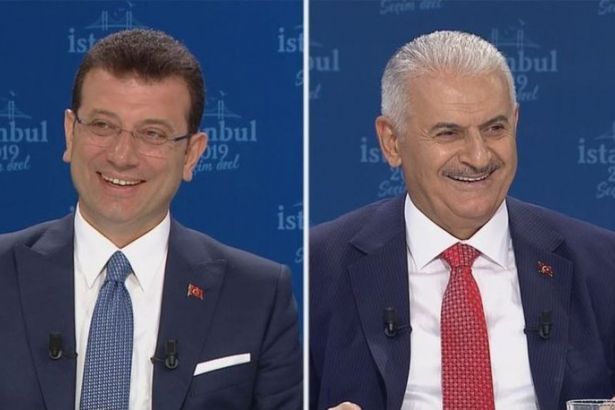 The program was broadcasted live on all major channels and moderated by İsmail Küçükkaya, a Fox TV journalist known with his critical stance towards the AKP government compared to the pro-government programming across mainstream news media.

The program was the nation’s first televised election debate in 17 years, lasting about three hours ahead of the revote in Istanbul ordered by the election council. The debate was carried out with the moderator's questions directed separately to each candidate. The participants were given a limited time to answer each question and, as a rule, not allowed to directly respond to each other.

The last elevised election debate in Turkey was between AKP leader Recep Tayyip Erdogan and Deniz Baykal, the then-leader of the CHP, took place before 2002.

After the moderator asked why the people of Istanbul have to vote again on June 23, “Strange things happened when votes were counted,” said AKP candidate Yıldırım. He repeated his claim that “votes were stolen,” without naming any culprit.

“Who stole votes for God’s sake?” responded the CHP candidate and said the election council had not made such an allegation.

The subjects of discussion in the three-hour event started with the March 31 elections and the revote decision. Talking about their plans on Istanbul, the candidates also asked about Turkey’s economic troubles, migrants in Istanbul, city planning, etc.

"NO ALCOHOL, NO MIXED-GENDER POOL"

Responding to the accusations coming from the other side, the CHP candidate denied that he had opened facilities selling alcohol and allowed "mixed-gender" pools in Istanbul's Beylikdüzü district, of which he was the former mayor.

"I opened 9 social facilities in Beylikdüzü. Is there any alcohol in them?" he added, denying the anti-propaganda without mentioning why he was accused of providing such services.